“Kites rise highest against the wind, not with it.” Winston Churchill. 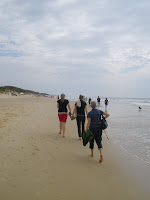 Such a flying visit but we always manage to squeeze lots into the time we have. Saturday morning we drove in to Coolum & hiked up the beach to the kite festival. 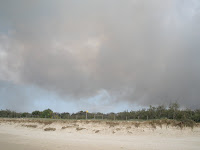 No, that's not cloud; that's smoke haze from the huge fires burning through the heathland. The smoke was miles out to sea too. 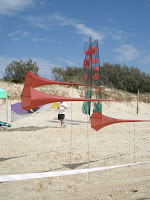 There were all sorts of weird & wonderful things going up along the beach. These wind socks were decorative as well as useful & I thought the poppies on the banners behind them were pretty cool too. 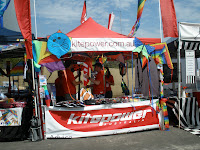 Up in the dunes they had stalls & while I appreciate they expected a huge crowd who would all expect to wine & dine, once off the beach & out of the cool sea breezes it was stinking hot; 30C [86F]+ & climbing. Several stalls offered kites but the coffee stand was next to the icecream vendor & the all meat BBQ was plonked next to the all~vegetarian stall. Someone has a bent sense of humour! 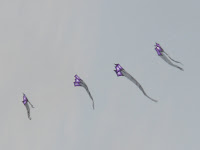 And then, of course there were the kites. Strings of kites. 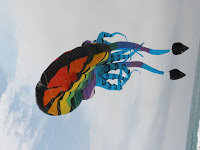 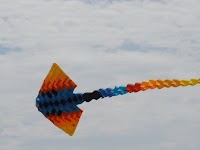 Unusual & colourful kites. These big ones were really difficult to get airborn in the gusty conditions & several came down unceremoniously in the sea! 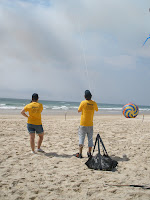 This one was anchored with a very large bag of sand. 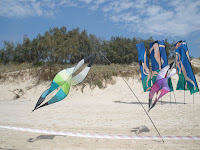 Mum was rather taken with these... 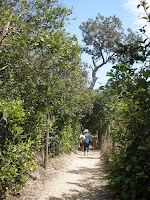 Most of the Sunshine Coast beaches have a nature strip between the beach & the road & you walk over the dunes along sandy paths cut through the scrub. On either side you can hear the birds calling; lots & lots of birds. 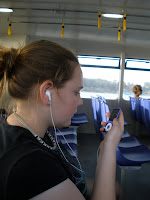 We didn't stay long. It was just too hot & the t.v broadcast of Creative Generation started at mid~day. Ditz & I were nothing more than unseeable white blobs amidst the massed choir but we were both fascinated to watch the show the *right* way round. We've only ever seen it as part of the massed choir from behind! lol.
We had some lunch then headed home with me driving because Lid had a touch of heat & a massive headache. Lots of traffic going both ways because it's the last day of QLD hols & the first weekend for Victoria & N.S.W. but we made good time & we changed drivers after a quick stop in at the boy's. I then rather smugly told Liddy she could park the car & run for the boat! I am so pleased to pass the running mantle on to someone much more suited to quick sprints for a departing boat!

Beautiful kites. What a fun way to spend some time. You live in a great place. BTW, I think I'm feeling better. : )

Meh. Busy, reading, working, holidays, tourists, with you in spirit if not in comments. Back soonish

What lovely kites. I can't remember the last time I saw a kite in my area.

"Coolum"... I love the names of things and places you have 'down under.' everything just sounds so..so.. cozy :-)

my favorite thing hands down would have been that nature strip. i love walkways like that and to have one filled with birds and bird sounds would be bliss to me...

i know you've only been gone for a few days, my dear, but i have missed you! nice to have you back among the blogging♥

The kites are so beautiful! Reminds me just a bit of the state park we used to visit daddy and I when I was growing up. Wonderful memories all of them.

That is so neat. Those are some very creative kites! (And food stands...that's where I would've spent my day.)

Sandra: Great you are starting to feel better! Queensland is a great state but they all have something going for them. I'd really live to live in Tassie ~ except for the weather. Arctic & freezing ~ even in summer!

Hojos: never mind, you gotta eat & pay for those kids to go to camp! ☺

Allison: Aren't they great ~& we didn't see the best of them either.

Diane: Those paths are barely 30 seconds worth but so lovely & cool after the heat of the sand & a real sancturary for the wildlife. I love 'em!

Birbitt: They are lovely & some of them were sooo BIG! lol

Britwife: I don't think you would have wanted to spend all your time at the food stands. It was stiflingly hot; not a breath of air & really quite caustrophobic. It was just going to get hotter & hotter & the wind was really chancy so the girls didn't try their kites.

That big ugly kite looks like an octopus or something! (and ha, I see nekkid kites LOL) ... it all looks so summerish, and here we are waiting for snow :-P

Is that an iPod thing she's got there? Cindy has been yammerin' about those, wants one. I think she'll just lose it a few days later, they're so tiny!! :-P