Read while you wait... 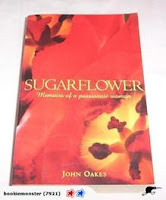 She always considered gardens & the things that grew in them [especially if she planted them] to be infinitely more reliable & far more beautiful than most of the people she had to put up with. ~ Sugarflower.
I sit around a lot waiting on Ditz, who's either tweeting or tooting, & an hour can be a long time if you have nothing to do but wait. Mostly I read. Occasionally I get the sort of book you want to rave about. Sugarflower by John Oakes is like that.
Now Sugarflower is one of those delightful books that is a little hard to classify. It's not a biography ~ though it has biographical elements. It's not a gardening book ~ though it is all about gardening. It is not a love story despite being *the memoirs of a passionate woman*.
Lucy Wilkie was born & raised in the tropical north of Queensland ~ sugarcane land. Acres of the stuff grows like a green sea all over the north & for years it was the industrial backbone of the region. Now, of course, it's tourism, which is hardly an improvement!
If I had met Lucy Wilkie in real life I would not have liked her at all. She was officious, domineering, avaricious, snobbish, abrasive ~ all traits I can't stand & which send me running for cover. Mind you, she would not have liked little old me either. I lack the elegance, the English reserve, the elan Lucy Wilkie appreciated in other people ~ especially if they didn't rock her boat. Not the sort of woman you'd want to take to your heart but an extremely smart & interesting woman just the same.
She opened & ran the first haberdashery store selling exotic fabrics as well as more utilitarian ones to the women of far north Queensland. She began her own cosmetics industry. She needed all those less than admirable qualities to succeed & succeed she did; admirably! She also gardened & it is why I like this book. It is Lucy Wilkie's one redeeming quality in my opinion. She had an aversion to plain old Aussie natives, but that was usual in her day & age, but as a gardener she had vision. She had courage. She had green thumbs!
Lots of us homeschoolers talk about *living books* for our kids while forgetting *living books* are for adults too. This is a *living book*. There is so much of the history, both cultural, social & physical packed into the story. For example sugar was considered such an essential commodity the Armed Forces wouldn't take anyone involved in the business during WWII & I found it interesting that those north of the *Brisbane Line* treated it as something of a joke. Government policy decreed that if the Japanese actually managed to invade Australia from the north we didn't have enough troops to defend the coastline so everything north of Brisbane would be abandoned! The mind boggles.
There are almost two parallel stories running through Sugarflower. The first is Lucy Wilkie's life story from her beginnings in the small north tropical township of Babinda to Brisbane & beyond. The other is the story of her gardens & the plants she loved. John Oakes, her grandson, has done a lovely flora biography at the end of each chapter detailing the plants mentioned in the chapter & something about their cultivation & attributes. Many of the plants I know as someone in the family has grown them at one time or another. Some are new to me. Some won't grow this far north & others won't grow this far south ~ not for me at any rate!
If you are not Australian this is a fascinating look into tropical Australia. If you are Australian it is a wonderful insight into the growth & history of the northernmost reaches of Queensland. Oakes writes with love, wry humour & a clear understanding of his grandmother's faults in a very readable style. It did take me a bit to get into the book. The first chapter was something of a slog & the style grated on me but the later chapters flow much better & overall it has been a fascinating & scintillating read. Highly recommended.
Sugarflower: memoirs of a passionate woman ~ John Oakes~ New Holland Publishers 2001 ISBN ~ 1 86436 697 4
Posted by Ganeida at 12:38 PM

Have a wonderful weekend.
Blessings,
Jillian
<><

You wrote:
"If I had met Lucy Wilkie in real life I would not have liked her at all."

One of my favorite things about books is the luxury of experiencing such difficult people at a safe distance;)

Sounds like a good read... after years of not having any time to read for anything much more than information, I am finding myself with blocks of time that must be filled, such as your waiting times for Ditz. I'm beginning to read.. really *read* for the first time in decades. It feels like a coming home♥

I have ordered it from the library, thanks. I have read Sweet Tea by Brian Ridden.

I am just wondering if you read this one from cover to cover in sequential order or your usual method?

Usual method, lol. Lucy annoyed me but the book is beautifully written. Her grandson is much nicer than she was. ☺