And away we went!

One of the advantages of being disorderly is that one is constantly making exciting discoveries. A.A. Milne. 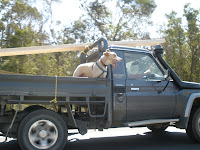 This post was meant to go with last night's but you know how it goes; stuff happened.


Thursday Liddy was booked in to take her practical test to get her P~Plates [provisional licence for those who don't know]. This would mean she no longer had to be supervised everywhere & could take her car herself without needing to drag me along. Her instructor [the one she got to make sure all her holes were plugged & we hadn't passed on too many bad habits in teaching her] was really happy with her log book: mountain driving, city driving, country driving, night driving, rain, fog, hail. dirt, cement & bitumen ~ Liddy had driven the lot sometime or other over the last year. Apparently lots of learners don't get so much experience & just drive locally. He was pretty confident she was ready for her test & would pass first time round.


So we put her on a boat first thing Thursday morning while Ditz & I organised to go up to mum's for a few days & lugged all Lid's stuff with us. I drove into Cleveland to pick her up, one very happy girl, the proud owner of a brand new provisional licence! I am so thrilled for her! If I do say so myself, she's a pretty good driver now. Hard to believe now how scary she was those first few drives when she was just starting out.


The highlight of our drive north was this doggie, who was riding in the back of his owner's truck & nearly beside himself with delight at driving up the highway with the wind in his face. He yapped happily at every car that zipped past him, lunging at the end of his leash. 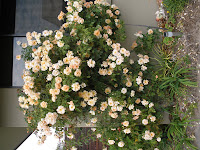 The first sight we generally see when we pull into mum's is her rose bush, which is inevitably bursting with blooms & the envy of every other gardener! Don't strain your eyesight. Yes, the photo is sideways but I don't know how to delete it without losing the entire post; not that it matters much. Anyway you look at it this bush is just a mass of flower & totally gorgeous. 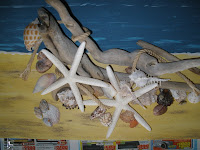 The next thing to check is what crafty business my mother has been up to. She does really neat watercolours & has dabbled in oils but this time she was collaging with shells & things. 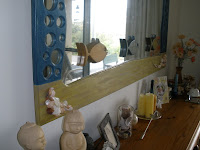 Mum has gone with a beachy/seaside theme throughout her home although her actual *waterviews* are almost lost at present behind her rampaging garden. The grevillias attract all the honey eaters & there is constant movement as the birds squabble for feeding rights to the flower heads. 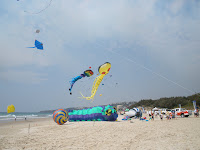 Liddy did her first solo drive by taking Ditz round the village. I believe Ditz hyperventilated the entire way round ~ a whole 5 minutes! That didn't stop her getting in the car with Liddy on Friday & driving to the beach for a swim. Well, Liddy swam. Ditz doesn't get in salt water where things live that bite & can't be seen!


Hard to believe we're barely in spring! It was sooo warm, though mum's house is usually nice & cool. By Breakfast the mercury was pushing past 20C [68F] & a couple of hours later it was easily hitting 30C, 86F.


Saturday morning of course we went & saw the kites. I'm still wondering if they ever got that giant caterpillar in the air!


We're home again now as Ditz promptly goes into Sunday rehearsal for Singapore. As we hnow have a clash of car usage am not sure how that is going to work out.

Congrats Liddy! That's awesome. Ha, I haven't driven myself in half of those conditions LOL

30c? Ha, it was like -4C (below zero, nearly ready to snow) here this morning LOL

I'm with Ditz on that one...the last time I got into salt water I was scared nearly to death by a school of minnows (long story) and attacked by a stork! I will never again set foot in water that is not inside a CLEAN swimming pool!