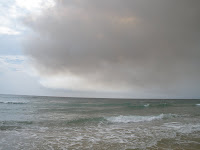 Ocean: A body of water occupying two-thirds of a world made for man - who has no gills. ~Ambrose Bierce
I live on an island. On any given day a good part of the Pacific Ocean swirls past my back door. Water; it regulates life as we know it on this planet. Without it we would not survive but it's strange stuff.
For one thing there is only so much of it. We might have just as much of it now as when God plonked Adam & Eve in the garden but we can't manufacture any more of it either.
Oceans store most of the Earth's water; in fact there is more water around than land but only 2% of the available water is fresh & of the available fresh water 90% is found in Antarctica & frozen! Only 1 % of fresh water is actually drinkable!
Water is the only natural resource to occur naturally in three forms: solid [ice], liquid [water] & gas [evaporation] but despite this fact some deserts see so little rain the native populations have no word for it.
Most of our bodies are water & we need water to survive. Everything from watermelons [93% water] to elephants [70% water] needs water but neither the desert rat nor the koala bear drinks water. I don't know about the rats but koalas get their water needs met through their consumption of gum leaves.
Given how dependant we are on the water we have it is truly mind~boggling how much pollution pours into our water supplies each year. Numbers don't mean much. Suffice to say freshwater animals are disappearing 5 times faster than land animals.
And just to highlight how blessed we in the West really are: most of the world's population must walk for over 3 hours to fetch fresh drinking water.
Posted by Ganeida at 1:29 PM

*climbs through pic to go for a swim*

Next visit back east, I'm bringing back as many seashells as they'll allow on the plane. Hmm, okay, maybe next-next as it might be winterish on the next and kinda hard to, y'know, bust 'em out of the ice.

I love your trivia.