Bush-stone Curlews make a somewhat eerie, wailing noise at night (which is actually pretty cool!), and have been responsible for many a phone calls to the police, from people thinking someone was screaming in the bush. For this reason the Bush-stone Curlew is also known as the 'Screaming Woman Bird'! Australia Zoo

Curlews. They're heading towards the endangered list though you'd never know it round here. They are one bird that benefits from clearing. They're one of my favourite birds ~ ok, so I get pretty excited about some pretty weird stuff but these birds really are something else.
Curlews are nocturnal so you expect to see them flapping about on spindly legs & making the most unholy noises at night. We have a largish extended family that includes our yard in their territory & I'm always finding them stalking through the yard or hurtling under the clothesline or Issi stalking them with great interest. 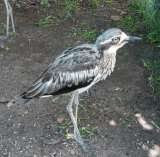 What I don't normally see is one parked in the middle of the road & point blank refusing to move! I had to drive round it last night when I went down to meet a boat & pick up Liddy. It was still there & still parked when we got back so I put the headlights on it & idled the car while we sat & watched. Sure enough the bird got agitated & finally stood up. Two tiny puffballs on sticks shot to their feet as well. When mama bird sat back down her babies promptly squirreled under her wings & squirmed under her tummy.
Curlews are pretty good parents ~ which is why we have so many curlews ~ & seem to manage to raise their chicks to adulthood ~ unlike the plovers that just seem to provide snacks for snakes & raptors. It's rare to see chicks like that so we oohed & ahead & gushed suitably before pulling around them yet again but it got me thinking.
Jossie was not quite 5 when we moved to the island; an urban laddie whose experience of bush life prior to this date was limited & sanitised. Getting towards dusk that first evening he finally decided he need a toilet, right then, right away. I instructed him in the finer art of camping without amenities & sent him toward the nearest big tree. He disappeared behind it & we promptly forgot all about him.
Next thing the curlews started up! They sound like a banshee having a bad hair day. There is nothing quite so bloodcurdling as a curlew wailing when you don't know what it is. Jossie shot out from behind his tree & straight up his father like a monkey up a pole where he clung gibbering! Meanies that we are we howled with laughter before we were able to collect ourselves enough to explain.
Ever since our kiddies were little our summer break was the time for visiting my parents & in due course I rounded up the troops & headed north leaving Dearest in charge of the cat. It was one summer I was sorry to have missed at home. For the one & only time the curlews corroborreed at our place, 30 or more birds from adults to babies, bibbing & bobbing & crying for the full moon. I really wish I'd seen that one.

So thats what that unholy noise is? I knew we called them Curlews but was'nt sure what they were actually called.

Hi Ganeida,
It's great to be back!

I remember plovers nesting where my dad worked, and they all survived pretty well there, but it was the police compound, so perhaps that had something to do with it.

Have a wonderful week!
Blessings,
Jillian
<><

I found a site where you can here the call./www.threatenedspecies.environment.nsw.gov.au/tsprofile/profile.aspx?id=10113

I love listening to the various birds' songs... although often the term "song" is quite a stretch. I heard a new bird just the other evening. It sounded like a rusty hinge turning... screee screee. Try as I might, I couldn't get a good look at the producer of said call, so I'll probably have to wonder and wonder what kind of bird that was. Now, I'm off to visit kimba's link so I can hear the curlew's call...

What a beautiful bird!