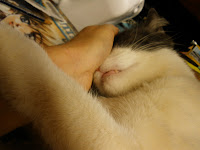 "If you want to know the character of a man, find out what his cat thinks of him." ~ Anonymous

Liddy has gone camping. We miss her although she rang thrice yesterday: once to let us know she had found the place & arrived safely; once to ask us to google as her map had run out & she wanted the closest township for a pit stop; once to say she'd explored & was heading back to the camp grounds to meet up with everyone else. Silence ever since so we figure she is having a nice time here.

Liddy likes to share. If she hasn't got one of us with her she rings home. Iss watched the bags come out with a worried air but having sniffed them he became puzzled as well as worried. He could not smell anything of mine hidden in their depths but I was the one jangling car keys & heading for the door. He was very happy that I came home again. It's a very heavy responsibility being a cat's person; Iss takes my responsibilities seriously. Yes, he likes to sleep with his nose burrowed into my palm & his paws clasping whatever stray bits of me he can grasp.

Ditz was not happy to be left behind & I think Liddy would have taken her if she could but this is an 18+ camp & despite appearances Ditz has some way to go before she is 18. I am so grateful my girls have each other ~ & that they get on so well together...well, most of the time! They are so different the sparks fly occasionally but Ditz is bubbly easy~going company & Liddy is pretty tolerant of her sister's stranger quirks.

It is so quiet when we're down to just one child, even if that child is Ditz, I can't imagine none of them being home & the house always being like a tomb. I need more cats. No house feels empty that has a cat or two.
Posted by Ganeida at 3:04 PM

Oh my. Now I have a true and real picture in my mind of your relationship with Iss. That is your cat.

The girls will eventually leave, but you are right. No house is empty with a cat (or dog) or two.

Hi Ganeida,
I have a fridge magnet with the words (below).

"A house is not a home without a cat."

My cat ♥ me, as he has fresh meat - we went to the butchers last night to pick up the meat, and the cats end up with all the scrappy pieces.
Blessings,
Jillian
<><

Sandra: That is one weird picture but it is such an Iss pic! When I say he's neurotic/psychotic when I go away for any lenght of time I'm not joking. I wish I was. Even a very long day makes him anxious. He's such a gentle sweetie. I ♥ Iss.

Jillian: I quite agree. No house is a home without a cat curled up in the best chair! ☺

Cats are the most interesting creatures.

My cat expresses all his multiple personalities whenever I leave him for more than a day. First, he looks at me with large eyes and is rather talkative; then he purposely ignores me and goes to other people, even my daughter of whom he is jealous, all just to teach me a lesson; and after a few hours, he pounces on me unannounced and demands all the attention he missed and I had better cooperate or I will not get any sleep at all that night. It is an I-only-torture-the-one-I-love kind of thing with him.

Then add our newest member, the dog, who warns anyone, including the cat, when they come near me. Imagine a cat tearing as fast as he can while running a fancy evading pattern to get past the dog's blockade and there you are knowing that nails are going to be in your flesh should he make it. Now you have a bit of what I endure on a daily basis.