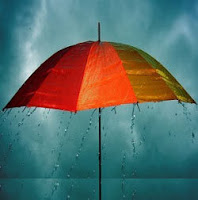 Be careful how you interpret the world: It is like that. ~Erich Heller

Sometime during the night it began to rain. Not heavily, persistently. This is a good thing. It has been dry & dusty & already this early in the fire season everything has looked crisply brown & overcooked ~ a disaster waiting to happen.

Finally things look like they are coming together. My Birth certificate has arrived so we can get our passports under way. We had a better week schooling though Liddy grabbed Ditz on Friday for a trip to Wet'N'Wild [theme park] ~ half of S.E Qld schools seemed to be there which really makes you wonder, doesn't it? I had that rare thing ~ a day to myself. Well, sort of. Dearest was floating round & Iss is a personality to be contended with but I was able to invite a friend over for coffee & chinwag on the verandah without worrying that Ditz wasn't doing as she ought or there were a million & one tasks awaiting my attention. I actually got some housework done & an hour or so of painting. Normally I paint merely to keep Ditz company as she is a better technician than I am but I find painting soothes the soul.

Saturday Ditz & I left early for her singing lesson. Ditz was not a happy Ditz. It was early & she expected to be in trouble with Alison & she was having trouble with one of her songs anyway ~all things that tend to make her scratchy. She had a great lesson! Some days I'm shocked to realise that we've got something right despite the way things seem. Alison was really happy with the work Ditz had done [complimented her on being self~motivated lol] & just did a bit of tweaking & sorted out Ditz's problems with her timing on her hardest song. We have another lesson at the end of the month & perhaps one more after that.

We then went down for soccer ~ a great stress buster & one reason for persisting when we are able. Lots of little kids this week so I did a bit of coaching because the guy in charge seems to think every kid on the pitch knows what they are doing when it is blatantly obvious that's not the case. We had kids who didn't know to bring the ball to the midpoint for a fresh kick~off after a goal or how to throw a ball in ~ & one guy simply picked the ball up & clutched it to his chest to keep his opponent at bay! Yeah, well. Nothing wrong with the idea! The kick~offs were a mess too. The boys won't listen [it's a male thing] so I grabbed the only girl on the pitch, told her to run like blazes down the line once the ball had been tapped. She shot of like a startled rabbit & was ever so surprised when I dropped the ball neatly at her feet & she found she had a clear run down the line towards goal. Now we just need to work on her not letting the boys intimidate her on the pitch!

I'm not as fast as I used to be & I don't like expending more energy than I need to, plus I've spent years watching soccer, so I've learnt to read a game pretty well & get a wicked delight out of watching boys who don't know me dismissing me as a rather silly old lady who has no business on the pitch at all ~ until they find the ball they thought they had possession of neatly stolen from under their feet or the little old lady zipping between them & the ball & sending it to the opposition. The dawning respect in their eyes is terribly funny!

No, I'm not fast & I huff & puff my way round the pitch but I can often find space when other players can't simply because no~one counts me & I set up the majority of our goals yesterday thanks to all the hours & hours I've spent over the years crossing balls into the 10 yard box for Liddy. Yes, I can place a ball fairly accurately, especially if I get just a little time to organise my feet.

It is early & cold & having had both coffeee & chocolate I'm going to head back to bed for a wee while before running Liddy up to work & organising our Sunday. May the Lord bless your going out & your coming in this week.
Posted by Ganeida at 11:12 AM

hee hee how lovely for you, blessing accepted and returned likewise

Hi Ganeida,
May the Lord bless you and yours this coming week, too.

It sounds as if Ditz has found her niche, and you, too.

I've been absent for awhile, looks like I have some catching up to do. It is a mistake to underestimate you! They won't make that mistake again.