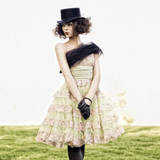 I base most of my fashion sense on what doesn't itch. ~Gilda Radner

It's mad around here ~ still. I very carefully filled out our passport forms; any mistakes were not mine but just the same we had to redo pages of the things & Ditz needed her passport photo redone thanks to her *chipmunk cheeks*! We won't discuss the hours [yes, hours, plural] it took to buy just one brassiere for the child who insists she is built like Liddy when it is patently obvious to all observers that she is not! I was getting quite beside myself while sympathising with the child. What teenager wants to be wired up like their great~great~grandmother?! With a choice of colours, styles & sizes more suited to Medieval Spain under the Inquisition as instruments of torture than the post sexual revolution culture of the 21st century? Walking through the lingerie department was reminiscent of exploring the chamber of horrors in London Tower ~ strange & bizarre contraptions for unimaginable uses! Neither of us enjoyed ourselves.

So today we try again to sort out the passports. I suspect there is still one error. Whether it is passed or whether we have to try yet again remains to be seen. To this end I sent Ditz over to flute on her lonesome ownsome so I could do paperwork. She was not a happy Ditz. Hours & hours she has to spend on her own. Poor Ditz.

While we are in Cleveland I am going to try on some *concert clothes*. I never, ever buy clothing. I get all the exposure to clothing departments I can stand taking Ditz & Liddy round the shops & anyone who has done that with either of them knows this is not an excursion to be undertaken lightly. Besides I am a homeschooling mum. Where on earth would I wear fancy daks? To the biggest concert halls in the world, that's where. It has occurred to all of us that if Ditz insists on performing in these rather snobbish venues then I need clobber other than my tatty & well worn jeans & Ts. So yesterday I looked ~ & was so horrified by the price of badly made clothing I refused point blank to fork over any money at all. However there is one rather nice little shop that always has really lovely things ~ for a price. I found something that I thought perfect~ for a price. It is a little unusual ~ which suites me ~ at a price.

I came home & thought about it. I talked it over with Dearest. We are looking at it as an investment; one set of good clothing to cover all the concert venues. So today I am going to try it on & think about whether I still like it when it is draped over my rather odd body shape ~ a mid calf~length skirt cut on the bias with some broderie anglaise inserts [I know! A skirt! *shudders delicately*] & a loose~knit pale baby blue shrug with 3/4 flared sleeves & a royal blue sleeveless top. I don't do heels so will need to find some strappy sandals & if anything I hate shopping for shoes even more than I hate shopping for clothing! Ditz is charmed. She loves shopping for someone besides herself. *sigh* This is not what I had in mind when I started having babies.

In every official photo I look scared to death. Not sure why. My sympathies to Ditz...at least she can know that proper underpinnings can prevent later back pain. Your outfit sounds lovely! I especially love shopping for others...my body is too odd, and I always leave either empty-handed or with a project for my tailor. I wish my sister would let me shop for her...she likes all sorts of colorful, trendy items I can't/don't wear.

Okay. If you are going to have only one outfit for concert halls it must be black. Melbourne black. This is not optional. Period. Get my drift? BLACK.

Apart for that it can be anything at all really. It is just the black that is important.


And oh, my dear! How I wish I could go shopping with you. I am very good at shopping... owing to years of very diligent study and hours upon hours of rigorous practice in my youth;)

Your outfit sounds very lovely... and my dear Ganeida! In a skirt? I am verkempt.

You are so lovely you *should* have some pretty clothes. Me, I do "frumpy" very well. ;-)

We need photographic evidence of the skirt. : )

Allison: menopause has changed my figure beyond all recognition & shopping for the &new me* is a nightmare. *sigh*.

Jeanne: Dear, dear, don't you mean red & trashy? ;P lol. I was thinking black to start with then saw the other but having tried it on we are back to black. I hate clothes shopping!

Diane: I wish you could come with me too. Having trapped me in the cubicle Ditz proceeded to pass the most awful clothing to me to try on!! It would be easier if I didn't like such odd things. By the time I find something that looks ok & I like I could have backpacked round the world several times over.

MrsC; I'm on my way over for coffee & cake in my time of distress.

MamaO: I do an excellent frumpy. I am comfortable with frumpy. I am no high flier. I *like* pretty ~ on someone else for me to admire! *sigh* Ditz is going to be the death of me.

Sandra: all bets are off. I put the skirt on & it looked absolutely awful on me! I was distressed because now I have to officially look for something.

Melbourne black. Is that a colour? Is it different to just black?

Kimba: Melbourne black only counts if you come from one of those snooty southern states that wouldn't know a warm day if they fell over it & are still trying to get over their inferiority complex because they aren't Sydney! ;P ;P *now running fast in the other direction*

Loved the description of fitting the bra. Oh, how I need to be comfortable.....

I definately second the motion of a photo of this lovely outfit once you purchase one. You deserve it.

Jeanne: thank you for playing...

HS4C: I can't wear one either; they don't make 'em that small.

I'll have to try to catch up with these last posts. In the last few months I have experienced shopping while thirsty (very cranky) driving 1 1/2 hours to get a passport for my then 15 year old, and buying her clothes, which went OK actually. I have just got a Facebook account and my cousin and friend who are the same age seem to like dressing up etc. My daughter was in Malaysia. The last line in your post I have said in the past two weeks as well.

I got my daughter fitted for a bra. Had driven 1 1/2 hours, got her fitted and the sales assistant said she was looking for another style. She actually changed brands and I was so disappointed that I didn't still have the sales lady on hand to verify this. Actually I am not sure I knew about it until later. Luckily her sister was better and bought what fit exactly. Better luck next time?