"For seventeen years he did nothing at all, but kill animals and stick in stamps"
- Sir Harold Nicholson (1886-1968) in Diaries and Letters about King George V.

My Dearest collects stamps. Not the pretty stamps with butterflies & flowers & *Things of Interest* emblazoned on them in bright colours but dull, boring stamps in dishwater colours 0f a king who was just as dull.
Why does he do this? Well it is a little complicated ~ but only because I find stamp collecting incredibly boring. No~one ever kills anyone. No~one gets martyred. There are no great political intrigues, insane love affairs dooming entire kingdoms [Ditz has just finished reading about Antony & Cleopatra], or heroic rescues...just little scraps of paper in insipid colours.
Yes, I am a big picture random thinker; Dearest is detail oriented.
Anyway, I have been helping him set up his blog & in the process today's trivia arrived because stamps may be boring but the people involved are raving lunatics. Raving lunatics are interesting so here's 3 random things about Australian stamps.
1: In 1809 Isaac Nichols became Australia's first Post Master. He was an ex~convict. {OK, so most of the colony were ex~convicts but I can only dream of the lovely hoo~ha doing that would generate in Australia Post today.}
2: Federation is 1901 [That's when we stopped being the penal satellite of Great Britain & became a Nation in our own right]. To celebrate this severing of the apron strings The Post Master General held a competition to design our very own Australian stamp. {Not to worry we designed a National Flag & an National Anthem using the same means} The resultant design was a one penny red roo on a map of Australia ~ & very nice too, incorporating as it did obviously Australian elements. 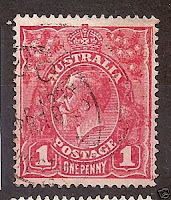 3: The King at the time was King George V. The man was an obsessive stamp collector charging his Royal Philatelist with procuring him the very best stamp collection in the royal kingdom, not a very good collection, not the 2nd best collection, but the premier elite collection. He also seems to have had an ego problem though my scattered reading seems to have reached a discrepancy about the actual events.
The Royalists out here objected to not having our head of state on our very first stamp, or KGV himself objected to being so very publicly snubbed. Either way the end result was the KGV issue ~ which is what my dearest collects ~ & very dull it is of him indeed! To add insult to injury, it is still treason to post any Head of State [king or queen] upside down on your letter!
I don't think it gets more trivial than that!
Posted by Ganeida at 1:23 PM

My grandfather was also a stamp collector. I did not see the attraction at first, but my grandfather could weave a good yarn on just about anything that he fancied. I am amazed how easily I get caught up in another person's passion, so that at the very least I have an appreciation for it if not a genuine love. To love the man is to also learn to love what he loves.

Ah, stamp collecting, I never found the love of it, though not for lack on trying. I though was never much of a collector of anything really...I just didn't hold much value in collections, I really preferd just a few select important "treasures" Though I do enjoy looking at others collections and I find them fascinating, just not one to do it myself.

Hi Ganeida,
My dad was an avid stamp collector until his death in 1986, and his stamp collection was excellent, although I doubt that it would have rivalled King George V.

I can see the thrill of it (for a second anyway). Imagine if you FIND one! He's probably chuffed for days.
We collect rocks (agates). That's about it. Our house isn't big enough for collections! :)

Every few years or so there is a news article about a rare stamp printed upside-down and goes for an obscene amount at auction...other than that, I guess I just don't see the appeal. I come from parents with dozens of "collections" and "collectibles," so perhaps that is just their child rebelling.

Hmm..a man that stays busy with interests is a good thing. :)

I would not dream of sticking our beloved Queen the wrong way up on an envelope. She is always the right way up,though occasionally, it must be admitted, I have got the envelope and the address the wrong way up.