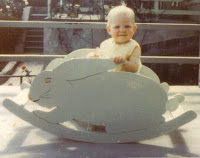 "It doesn't matter who my father was; it matters who I remember he was. " ~Anne Sexton
My father built a number of things: a boat that sank; the boat he built in the living room & then couldn't get out the door; a canoe [lots of boats]; the rabbit rocker come high chair.
I remember the rocker. It was relegated to the dim dark regions under the house where all the things he had no further use for lived ~ boats & canoe, his old air force hat, parts to cars we no longer owned, things that nobody could name & nobody owned to bringing into the house.
The rocker is a reminder of a man I never knew. I remember my father, the man who spent ages trying to get his 2 year old daughter to say, "Cheese please." &...failed. I would say "cheese" or I would say "please" but "Cheese please" I would not say.
There was another man. One I did not know. Oh, I got glimpses of him sometimes. Sometimes I got a glimpse of him through other people's eyes & could hardly recognise him. Did the cautious man I knew who insisted we wear life jackets before setting foot in a boat ever sit up a mango tree swinging a billy can of rocks for his brothers to shoot at with their .22s? Was this the man who rode a motor bike [an Indian for the curious] & totaled at least one car? I know those genes got passed down. My youngest brother was something of a menace on the road for a while there, but then it wasn't a car that killed him.
I can't see far enough back to recognise the small boy who threw up when he learnt his father had just died, or the one who was babied by his big sister, or even the young Lothario my mother met & fell in love with.
I know he grew up on a farm. Gardening is a family failing but none of us have ever made any money from it. Gardening is just what we do. My grandfather was a market gardener. Twice in his life dad farmed cattle, once with his brother, once on the 50 acres he retired to, but farming is not how he earnt his living. Nope. Dad was a pilot. He went into the air force during the war & when he came out he continued flying. Mum was the young & very pretty air hostess he flirted with her very first day on the job. The men in my family are not backward about going after what they want.
Dad held the trophy of the Wooden Spoon for being the biggest stirrer but he was a softie at heart. The last family cat was the sole survivor of an airfield litter whose mum had chosen a poor spot to have her kittens. My mother nearly had a fit but dad just wanted to know what she expected him to do; he could hardly leave the poor thing there!
Year by year my father buried some things so deeply they blurred who he was. He never spoke of the war that scarred him deeply ~ or of his father's death ~ yet the telling of stories is the thread that binds from my Nana, grandchildren gathered at her knees, telling us the story of Who Killed Cock Robin? & the Babes in the Wood till we were all howling like dervishes, to my aunt cheerfully rewriting the family history in romantic hues to my father singing on the long, long car trek between Sydney & Brisbane, 3 squirming children crammed amongst the luggage, the 2 with the windows hurling up, " Tell me a story/ Tell me a story/ Tell me a story before I go the bed...."
The stories are all the truth that remains because it doesn't matter who my father was, only how we remember him. I remind myself of that on the days when I am tempted to be the ranting, raving, shrewish, harridan I could so enjoy being if I let myself get carried away. That is not how I wish to be remembered so I refrain. Mostly.
Posted by Ganeida at 2:30 PM

The rocker is splendid.

Yup, I always try to remember that how I act my not go away after the act is done, but that some will remember me that way even if it's not who I am so I try to be my best at all times so people will one day remember me fondly. Mostly I do it for my children though, I want them to be able to say mommy was always there for them.

I also have memories of family and I'm sure they don't adequately portray the people they were but none the less it's how they are remembered in my mind.

Our memories are something no one can ever take from us, and most of the time that's a good thing.

It's so true. And a wonderful reminder to try to make sure that the memories I leave with my kids are good ones.

Hi Ganeida,
I remember my dad well. He was the one who always fixed my car and didn't charge me for fixing it.

He showed his love for me in so many ways, but it wasn't until the weekend before he died that he actually said, "I love you". Those words I shall cherish forever, and I am careful that I tell my children that I love them often, and always try and show my love for them.

I miss my dad so much, but I take his values and his budgeting skills with me throughout life. He was/is a wonderful man, very stoic, straight down the line and a man that you could entrust your life to.

Thank you for the memories - they are precious!
Blessings,
Jillian
<><

When beginning to homeschool more formally, I had this philosophy--I am quite full of them actually--that an education is mostly memories, just a continuation of the years I had already spent reading to my youngling in a rocking chair, so a homeschooling day is about making good and lasting memories.

Some days I fail so miserably, but it is always in the back of my mind that I would like to be remembered fondly and tomorrow, when we tackle lessons again, is the next day, the next memory.

Thanks for posting this....because I want to be remembered fondly, as well! Unfortunately, it seems like I have wayyyy too many days where I frown more than I smile.