On the first day of Christmas...

“This suspense is terrible. I hope it will last.” Oscar Wilde 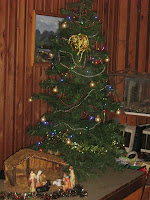 We've done it. We've got the tree up. It's all we've done but it's a start. Ditz has gone all avante guard & done a minimalist tree this year. I was rather impressed. She's gone for 'less is better' so most of the decorations are still in the box & she chose those things that matched her colour theme of gold. I have yet to work out where I'm putting the stockings but I'm sure Ditz will have some good ideas for that too.

This year Ditz declared she was too old to decorate the tree but of course once I started pulling out the boxes she couldn't help herself. She is nowhere near as jaded as she would like to think herself. Ditz trying to contain her excitement is like having a live hand grenade rolling round your floor. I'm not overly keen on live hand grenades. 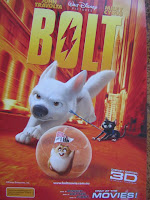 Because I am a mean mummy & the music scene these days is fraught with questionable morals & *colourful* language Ditz is only allowed to listen to either the Christian radio station or the classical radio station. For a musical afficiando this is paramount to child abuse but was not enough to prevent her entering a competition for free movie tickets. *sigh* How that child does complicate my life!
I would never in a thousand years have chosen to go & see Bolt. If I did go & see Bolt I would not have travelled all the way in to town to see it. As I pointed out to Ditz, parking was going to cost me more than the tickets were worth. God is going to great pains to ensure I know my way round Southbank! *big sigh* The mind boggles at what next year may bring!
Naturally the premier was on a Monday night. Monday's Liddy works late. This meant I could not take the island car because Dearest needed to pick Liddy up. Monday the last boat is 10pm, which meant we were tight for making it back in time. Ditz knew I wasn't wildly enthusiastic about this whole venture but she'd won herself the tickets so I agreed to drive her in to town. I think I mentioned somewhere that I thought Ditz needed some frivolity in her life. I'd like to rescind that.
And this people is why our eating habits just get stranger & stranger. 3.30pm is far too early for tea. It's not even snack time. No~one is hungry then, especially if, as so often happens, lunch occured between 2 & 3. By 6pm, when we arrived in town, it is another matter entirely. Anticipating this, & knowing Ditz had sweets in her bag, I walked Ditz into Southbank for Pizza & ice cream The pizza was terrible but the ice cream was pretty good. It just nicely filled the gap between parking the car & finding our seats for the movie. We did not get lost, caught in traffic or cross unknown bridges so the time I had allowed for these crisis was available for eating at a leisurely pace. We saved all that for coming home.
I know it's clever & everything but I'm just not a big fan of animation & frankly Bolt is anything but cute & cuddly. He is one very ugly looking mutt. So I wasn't expecting to enjoy myself, you know. If Liddy had been available I'd have sent Liddy in with Ditz. How wrong could I be?! Bolt was really, really good. Good message, great story, funny, funny movie & I didn't notice anything even remotely questionable. Ditz positively glowed. She felt like she'd given me a real treat & given that she seems to suffer a guilt complex from all the running round I do on her behalf she was chuffed beyond words to be able to do something nice for me. The child has quite good instincts.
It was after 11 by the time we got home. I have no idea why I attempt to give this child a well regulated life with a designated bedtime that will ensure she is awake, bright eyed & bushy tailed, at a civilised hour. Every year we become more decadent, staying up later & later, gallivanting all over the countryside, hob~nobbing with questionable sorts. It is heady fare but so far she's still pretty grounded; total air head but she knows what the important things in life are. Nah, we had a great night together. "I'll go get my ball!" *maniacal laughter*
Posted by Ganeida at 12:02 PM

Oh, I'm so glad you guys had a great time! I was all braced for hearing about another police officer LOL!

Your tree is lovely too.

MrsC! :) Nah, the lads in blue were busy sorting out a problem at one of the big international hotels as we passed by. Unfortunately Ditz thinks it hysterically funny to give them a big cheesy grin & a royal hand wave as she passes ensuring we get some very strange looks & I should like to point out this child is considered completely normal by the experts!!!

The tree looks terrific in RL.

Either you've been posting a lot lately or I've not been coming 'round as often as I should. I never bother with the dates on the blogs because they are usually wrong, what with time zones and stuff.
Either way, it is good to do some catching up. And now I REALLY need to get to work.

Cute tree! I love your nativity scene - we don't have one....I looked a lot this year, but the only one that I found was the "Precious Moments" one and..well...no. LOL

We listen mainly to Christian music as well - er, well, okay...we being the kids and I LOL ....Blair, on the other hand, is much more likely to be blasting Def Leopard or something in the van. *sigh* :-P

Ditz's tree is really pretty. I like the look. I have only heard great things about 'Bolt'. I'll see it when it comes to HBO.

It's wonderful you and your daughter had a fun night out and that she could do something for you.

You remember when you were a teenager, right? I bet Ditz hears some questionable music when she can! But it's a mothers job to keep trying. : )

That quote is funny! I'm glad you lived through the ordeal.

moly, what I *want* is one of those minamalist hand carved wooden nativity scenes that cost your soul & everyone else's to boot but seeing I couldn't afford one of those this is a poor 2nd best. It is very similar to the one my mum has & we've done well for my kids not to have shattered it as they loved playing with all the figures.

Sandra, Ditz has some questionable brothers & seeing as it's a little hard to ditch them :) she is far more savvy than she should be.Ditz also considers me a musical moron but I don't understand rap & she has no idea why I like the plain chant.

Mrs. Mordecai, Oscar was a funny, funny man & I love quoting him even when I don't agree with him. ;)