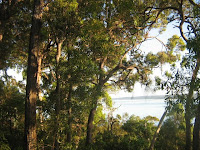 It is a glorious morning! Even better I will not be on the mainland today. I did that yesterday. I was not a happy little shopper. I had plans on disturbing Ditz early & heading to the mainland before the shops got crowded which would have meant I'd be home before the worst of the heat ...until Liddy put gremlins in the pipeline! Liddy was starting work at 10.15 instead of 8am so the earliest boat I could go on was the 10.20. Yes, I was seriously unhappy.

So there I was watching the line form on the pontoon & down the jetty knowing every stop would be the same & everything would move at a snail's pace when Liddy arrived in absolute floods ~ which is not like Liddy at all. I hate getting caught like that. I had to be on that boat while trying to get *tea & sympathy* into Liddy at the same time. Poor kid. She's sooo tired & everyone's tempers are fraying & she will take things said out of frustration personally & she had just walked out of work. I felt awful leaving her but she did manage to pull herself together & walk back into the fray. She has a great boss who really is mentoring her & grooming her for more responsibility [& Liddy hates responsibility!] & he sorted out all the fraying tempers & Liddy's meltdown & she was much more her usual cheery self when I arrived for her late lunch.

Meanwhile Ditz & I faced the mainland fray. There was a line of cars all the way down the hill from the first set of lights to the round~a~bout! Ditz's eyes popped. Three changes of lights it took to get us through! Queensland drivers are insane at the best of times. Christmas is not the best of times. Liddy is always astonished that while there may be hordes before us & hordes behind us I always seem to get this little bubble of space with no cars in our immediate vicinity. I just figure the Lord knows how stressed I get & ensures I have the breathing space I need! :) I must do ok. Ditz is a terrible backseat driver when Liddy's behind the wheel but she pays no attention to my driving & sings away merrily. I just wish she would sing the same song as the radio or turn either it or herself off!

I had three stops I needed to make: the fruit barn for a tray of mangoes & a whole watermelon; the hardware for the last table & chairs; the shopping centre for new sheets. It took us hours & hours. It was hot & crowded & there was no parking. There never is unless you're prepared to walk for miles. I parked near the hardware & made Ditz walk. Ditz hates shopping at the best of times; she particularly hates Christmas shopping. Even being given some spending money so she could buy small gifts for everyone was not enough to sweeten the experience but to give Ditz her due she remained a cheerful & willing little helper. It would have been much harder without her help & she gets rather a buzz out of carrying the heavy & awkward things for me. Long may it last. 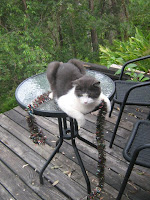 We got to the jetty just in time to watch a ferry pull out. I told Ditz not to stress about trying to get on it as there was no long term parking anywhere near the jetty so I would have to find some & walk back. Anyway, the next boat went directly to our island which is always better.
Iss is delighted with the tables & chairs. More Issi toys! Normally I find him curled in one of the chairs but the glass tops are lovely & cool when the heat is on. Another chore to add to my growing list; disinfect the tables before we use them.
Today's chores include putting the last table together & removing the wrapping before getting down to the serious business of making cheesecake & trifle. I have beds to make & rooms to clean as the boys swear they will arrive Christmas eve. Dino did make it to mum's as he said he would though I got a frantic phone call when he was nearly there but unsure of his direction & with a pile of unwrapped gifts. Not sure what he expected me to do about those.
Outside the cicadas are shirring in the trees. There are arrows of light shafting through the trees & the promise of heat to come. I'd best get moving while it is sill cool enough to work without melting. Christmas is coming faster than I am.
Posted by Ganeida at 12:41 PM

Looks like Christmas preparations are pretty extensive at your house : ) Yum, I love cheesecake and trifle! I was going to make a 'trifle' with the girls, something I have never done but with everything going on I am going to try a gingerbread house as they were very excited about that project. Do you have a nice recipe for trife?

Best wishes on your Christmas preps!

I have an easy tropical trifle we all like. I'll try & remember to post it tomorrow. I've had a big day & giving my Dearest computer tutorials on top of everything else has left me washed up & wrung out:) Trifle is easy though, especially if you buy the cake, which I do because it has a heavier consistency & the stalish quality you want for trifle, especially if you plan on using port or sherry as is traditionally poured over the cake. You do need to make it the day before though to let the flavours *mature*. lol.

I am so glad you are posting lots. Reading today was the balm I needed after murdering a new computer game. I got it for the girls - why do I even add that stress to my life? Merry Christmas.

MamO, posting is my sanity saver. Thinking how to make the crisis in my life into funny stories helps stop me from losing the plot completely. ;D