the things I think when it's wet. 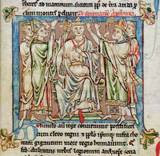 Hic jacet Arturus Rex quondam rex que rex futurus ~ here lies Arthur, the once & future king.
It is wet. Another 1/2 '' of rain has landed & water is still leaking from the sky. Someone should fix the faucet! It is wet, the library is shut for the Christmas break & I have time on my hands. Ditz & I may bake later on but for now my mind is unwinding like a spool of thread & where my mind invariably goes is down the old Celtic paths & where the old Celtic paths lead, sooner or later, is to Arthur. There is no need to point out that Arthur belongs in the Dark Ages if he belongs anywhere at all & may not even have been a Celt.
There is no good evidence for Arthur's existence although he is mentioned in Gildas, the Annales Cambriae, & Nennius. The Celtic word Art simply means bear & could very easily have been a title. He is also mentioned in Aneirin's 7th century poem Y Gododdin & Aneirin was the royal bard of the northern Pennine Court....so it gets pretty convoluted pretty quickly, which is just how I like it. You can tug at anything & something will invariably come up.
Take the sword in the stone. That is one piece of information I took to be pure invention, total mythology, but you know it may just be based on fact. Yeah, yeah, I know but don't snicker too loudly just yet. There is some evidence surfacing that Celtic blacksmiths chipped sword moulds into blocks of stone & poured their smeltings into that. Now doesn't that shed a different light on the old stories? I just love archaeology!
They can't prove Arthur. They can't disprove him either. There is far too much evidence that someone led a cavalry band against the marauding Saxons during the 5th century. Whoever he was certainly halted the invasion temporarily.
I have my own take on all this as well. After all I start with the premise that there is no smoke without fire. I also have a background in Celtic things so I tend to make some odd associations. Take that harmless English word *king*. Chances are you think of an absolute ruler who is the descendant of a king but that is not how it worked in the Celtic kingdoms. Ri is the Celtic word for king. You see it in names like Ryan [little king] & Riordan [king's poet] . Ris were a dime a dozen. Everyone was a king! Every two bit overlord claimed kingship. Some Ris had bigger war bands & claimed fealty from smaller Ris. They were called Ard~Ris, high kings. Nope, don't go thinking they were absolute rulers either. *First amongst equals* is how the Ard~Ris were seen.
Kingship was not the birthright of a firstborn son either. There was some form of democracy in operation to choose the best man for the job so the leadership might go to an uncle, nephew, cousin or younger brother ~ or even, to the Roman's complete disbelief ,a woman! aka Boudicca. Arthur may have been a king as legend claims. He may even have been a high king but it is more probable he was Dux Bellorum, War Lord.
All the evidence suggests he was a gifted military leader & that is how he is remembered. Stripped of the Later Medieval Romantic drivel the picture that remains is of a man fighting & winning 12 decisive battles at a time when Britain desperately needed a leader to admire & follow, to meld a country suddenly stripped of its Roman protection into a force that could protect itself, & unite the Celtic tribes, no mean feat in itself! Actually that last impresses me far more than the first two. The Celtic tribes were notoriously difficult to manage. Every man could fight or not as he chose; ditto every king. They'd lay down arms on a whim or fight like beserkers for no apparent reason. They baffled the Romans & they frightened the Romans who decimated the Druidic sanctuary of Iona in an attempt to eradicate Druid influence which held the memories & the genealogies of the people. Like any other persecuted religion Druidism went underground to re~emerge in altered form amongst the Christian culdees ~ or that's one version of the story. There are others but I like this one.
One of the oddities of the Romans [& I think they were a very odd people] was that much as they often despised the Celts they admired certain of their traits ~ verbosity being one of them. The Celts were known for being garrulous talkers. Didn't always make sense but they had the rhetoric & so they were employed as tutors in Roman households. Now what sort of stories do you think a garrulous people would be most likely to tell? Exactly! There are stories of Arthur to be found all over the continent. No, I don't know that that's how the stories were spread & certainly by Medieval times itinerant troubadours were spreading different versions of the stories that would eventually become Le Mort de Arthur all over the place. Odd that a man who may or may not have existed still holds such a grip on the imagination. I find that in itself fascinating.
I read the Arthurian stories early, was bored silly by Le Mort, found Geoffrey Ashe & archaeology & now find myself straddling two worlds when it comes to Arthur. There is the Arthur who certainly never existed with his round table & courtly Camelot & there is the other Arthur who's sons are named in Britain & fought 12 named battles before falling at Camlann & whose name still brings visions of knights in shinning armour & knightly honour, courage & a vision for the future.
Posted by Ganeida at 11:48 AM

My only real Arthur experience is courtesy of Tennyson. I was so enamored of the "The Lady of Shallot" that the only suitable thing to do was to memorize the poem while sitting beneath Waterhouse's print, so purchased for inspiration.

But Lancelot mused a little space
He said, "She has a lovely face;
God in his mercy lend her grace.

Loved your picture of your Christmas! When I told our son Charles how you spent the day he was confused. I remnded him of how your seasons are reversed and then it was like, "OH YEAH!" I guess he forgot that we are north of the equator! Ha Ha! We didn't have snow, it was chilly enough for a fire in the fireplace earlier in the week but by the 26th I was in capri pants and a short sleeved shirt. I'd probably adjust fairly weel if I was where you are!

What an interesting place for your mind to wander to on a rainy day. I usually try and think about how best to reorganize something : )

Thanks for the interesting post, I will share it with Oscar he is a great history and mythology buff!

Allison: lol. I had a print of Waterhouse's La Belle Dame sans Merci:
I met a lady in the meads,
Full beautiful, a fairy's child;
Her hair was long, her foot was light,
And her eyes were wild.Keats. Like the pre~raphaelite school.

Connie: easy enough to forget when all the Christmas cards show snow. :) MInd you some hardy souls swim all year round. Brrrr!

Ash:The Celts are rather an obsession of mine. I know more than any sane person should want to know. lol. But then organizing anything is not my strong suite & I am rather good at putting a colourful twist on history;D

Goodness lady, where your mind leads you is very strange. LOL Oh well I enjoyed the trip. LOL

MrsD: You can't say you weren't warned! ;D I guess you know what you're dealing with by now. lol.

Thank you for such an interesting story.