Heat, ma'am! it was so dreadful here, that I found there was nothing left for it but to take off my flesh and sit in my bones. ~Sydney Smith, Lady Holland's Memoir 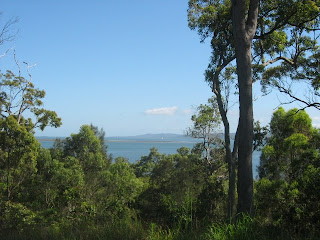 Summer is here. The thermometer stands at 28 C. The humidity is 66%...& rising. More storms are forecast. These are the summers of my childhood; the scorching, steamy days, the thunder & lightening followed by torrential downpours in the evening, the cicadas shirring amongst the gum trees, a vast blue sky...& maniacs on the road. They're all mad just before Christmas. 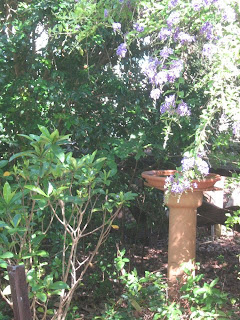 The summer colours are here too: The lilac of the Geisha bush over the birdbath where the water is tepid & uninviting; the blue of Jacaranda & the vivid red of poinciana, golden sunlight poured out like treacle. 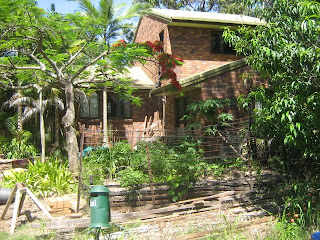 The flesh is bursting on the nectarines & the rich smell of juice fills the air. The cattle cane smells like burnt toffee & the overblown roses smell of decay. The plovers are jealously guarding baby chicks. The butcher birds are filling their larders but in the heat of the day everything is still. A little breeze stirs the water with a tantalising coolness & the promise of refreshing rain. 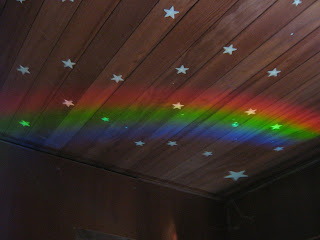 The house is a haven of coolness, all the windows thrown wide, but even here the light reaches out long fingers & throws rainbows on the ceilings. The wet smell of mud & salt drifts up from the waterfront & soon it will be time to put up the Christmas tree.
I think Christ was born in the summer months. Shepherds bring their sheep down from the hills in winter but the shepherds were watching on the hillside the night that Christ was born. When they go up to their summer pastures with the sheep they don't usually return before the cooler weather ~ but they came for Christ. They came because far from her home town where the birth of a firstborn son would have been welcomed with singers & rejoicing, God sent his heavenly host to sing & rejoice at the birth of Mary's son.
We know the story so well we forget. We forget the price Mary paid, pregnant & unwed. I live in a small community; I know how fast & unkind the gossip can be. We forget the price Joseph paid to raise a son not his own. We forget that Mary was real & pregnant & travelling a long hard journey nearly at full term. The thought makes me shudder. Imagine the heat & dust; the flies! Imagine lumping her bump on the back of a donkey, needing the loo more & more often. Oooh! I remember that feeling! And nowhere at the end of it. Nowhere & the labour pains starting. I know exactly the sort of fizz I'd have been in about then.
We have sanitized Christmas so much ~ removed the smells of the stable [mind you I like the smell of cow dung & it's very good for the roses, but still, I wouldn't want to birth a baby round it.], made a warm glow in the stable. Hm, Mangers & straw & oil lamps; I don't think so. I remember giving birth. It's messy & smelly & there are things that have to be done afterwards. Who did those? Mary? Probably. She would have been *unclean* I guess until after her visit to the temple.
All I can think is Wow! Someone else did that for me while I lay exhausted. That was one strong mama! As I pull out our Nativity scene & set it up & think how pretty it is with the Christmas lights twinkling around it I remind myself that that is not how it was for Mary, or for Joseph, or for Christ. It was much harder, much dirtier. Just the same God's shekinah abided in that place.

(I can`t make italics like I usually do because my math mouth things are gone..keyboard is being weird!)

That made me grin though :-D ...I never really thought about that....sure, I know it likely wasn`t mid winter and all that, but heh...the stables and the warm glow of oil lamps... LOL

Your post actually gave me some stuff to think about on a more serious note though...wonderfully written....I like it when people make me think. Usually. LOL

I can`t image a Christmas without snow though! (I mean our Christmas nowadays)

lol, moly. The deep thinks I think when I actually think. Misquoing Eyeore, I think. :D

Yes I think all the theologians agree that it was summer when Jesus was born. The Catholic church chose to celebrate in December for some odd reason. However, having always had Christmas in winter I cant imagine Christmas in summer. That is jsu ttoo weird.

I do have to say though that your description of the day there sounds so sultry and summery that I could almost wish it were summer here!

Beautiful! You should write a book. ;-P

Now I'm going to check how hot 28C is in *real* temperatures. LOL

Riveting post. Moved my thoughts and spirit just as you'd intended! If I'd been Mary, I think I would've rather have been dragged across the land on a stiff ole blanket rather than bump along on the back of a donkey! Mary truly was a heroine, wasn't she!

Melody, Mary awes me. I'd have whinged & whined & carried on at the Lord but she just gets on with it, trusting Him for everything. Sensible lady.