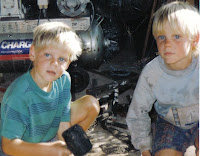 I may be a twin but I'm one of a kind. ~Author Unknown


Back in the days...I first read Heidi's Children back in primary school & I became enamoured of the whole twin thing.

This is a singleton phenomena & as little girls do, when playing *happy families* mine always included a set of twins. I was aiming for a mixed bag. What I got was identical boys. I would not recommend this to anybody.

I love my boys but there is no getting round the fact original sin got doubled in their case. Oh yes, they look like angels. The blue eyes & blond hair is how I know for sure without blood tests & DNA tests & all sorts of other tests that they are identical. All the other kids got the brownish green eyes like an Irish bog.

At one they invented their own language ~ which they then taught to Liddy. My middle 3 are not native English speakers! At 2 they were dismantling their cots, the dividing wall in their room, & the plumbing caps on the toilet . At 4 they were killing the car with a tent pole straight through the radiator a la St George & the Dragon! At 6 their teacher was rolling her eyes because they had no singular pronouns. Everything was us, ours, we. Personal space, personal property were foreign territory to them. By 12 they hated each others guts enough to request they share no classes together even though each other were the only people they knew at their new high school! At 15 they said things like, 'You try this on so I can see how I'll look in it', or 'Get your hair cut this way so I'll know if it will look any good on me.' By 16 Dino had dropped through the cracks in the school system & we packed him off for Western Australia to go trawling with his cousin. It was the best thing we could have done for the boys.

I never bought into the *they're identical & it's sooo cute to dress them the same* philosophy. I can't think of anything more aggravating to the psyche. Twins have enough identity separation problems. I know. We watched the war unfold in our house. It was not pretty. I will never forget them parked in a corner of our living room taking it in turns to slam each other's heads into the wall! It was rare for them to fall out to such an extent when they were little but it was a foretaste of things to come.

Identity was such an issue that they didn't even have a separate name. They referred to themselves by a meld of their Christian names. I worked hard to combat this ~ everything from buying different gifts at Christmas & for birthdays even when I knew they would both like the same thing, to never dressing them the same, to sending them to visit their grandparents separately, eventually even separate schools & separate sides of the country & it was like blowing in the wind. They may have 2 souls but they are one in spirit.

I know there is a massive downside to being one of a pair & never being seen for yourself. It is aggravating to always be referred to as Mr Dino because the teacher can't tell whether you're you or your brother. It is maddening to be he focus of unwanted attention & insensitive curiosity... until you find out how useful it is.

I am not supposed to know but I do, that the two of them changed classes, then schools, then sports teams on a whim. All the kids knew but the teachers never twigged. I've lost count of the times one's claimed to be the other because what difference does it make after all?! He's me, I'm him. Not in law, bucko!

Mothers of twins often seem to remember the sleepless nights & the running after toddlers headed in 2 different directions. People who don't have twins goo & gush & say, 'Oh, how sweet! Twins!' Twins are not sweet. They are interesting & fun & unpredictable & aggravating, double trouble & twice as nice. Like anything else in life there are compensations & drawbacks but I would not wish twinship on anyone. Despite the fun & uniqueness I think it is very hard for twins to see themselves as separate identities & sometimes even harder for others to see them as individuals. That matters when it comes to spiritual things. We each stand alone before God & are accountable for ourselves. I think more than most twins find that almost impossible to do. From conception they live in each others shadow. When one dies he leaves only half a person behind. No~one wants to live as half a person.

Ever since my first was born I've said I don't mind having a houseful, but I want them one at a time, please.

This is interesting. My husband has triplet uncles and I never could tell them apart. One of them died a couple of years ago and I'm sure the remaining two feel they have lost a body part. For as long as I have known them, they have been called the triplets. They still are called that.

My dad is an identical twin. When one twin got dirty, they BOTH had to change. They dressed alike until they were 14 or so. :]