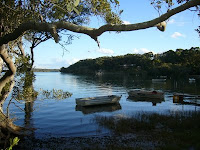 We do not remember days; we remember moments. ~Cesare Pavese, The Burning Brand

I have been busy & that is a good thing. I don't have time to remember. Christmas is not the happiest season for us. As Ditz says morbidly, 'All your family dies at Christmas.' Unfortunately it is her family too. She gets a little antsy around Christmas, especially if the phone rings at odd times. It is better to keep busy & let the anniversaries pass unnoticed. There are enough unguarded moments when the sight of a silver head, the drone of a light aircraft engine, the pungent smell of turps & thinners, brings memories surging to the surface, raw & sharp as a scalpel so that taken unawares I weep uncontrollably in public places. This alarms my girls. It alarms the public. This is not how one is supposed to grieve. Who made up these rules anyway?

I have found healing to be a painfully slow process. My head has never run very well in harness with my heart. Logically both my aunt & my father had a surfeit of days, good lives, much love, more than many people in this world ever have & certainly that is something to be grateful for. If only Eve had had the sense not to chat with snakes in the garden! If Adam hadn't been such a wimp! I blame Eve less. A talking snake would certainly intrigue me enough I would stop to chat. I'd still stop, which just goes to show I have learnt nothing from the past.

Mark is completely un~understandable from a worldly viewpoint ~ & I'm not doing well from a Godly one. Mark, who was social in every cell of his being, whose witness reached more people in a day than mine is likely to in a year, who was gifted in expressing his love for Christ in ways most people could understand & had everything to live for. Little brothers just aren't meant to die before their big sister! They aren't meant to die before their mother ~ or their wife! But he did. Mark should be annoyingly alive & bigger than life ...well actually he is, just not here, but here is where he was expected to be.

So from my birthday in October, when my aunt departed this world after a last tea~party with long dead relatives, to my father's death exactly a month later & Mark's in December, we traverse a Christmas season fraught with unexpected landmines. Amidst the commercialism & the gaudy trappings, the canned music & the greed we are acutely aware of the fragility & brevity of life; that at any moment it could end. That we have these moments together, a time to share & enjoy each other, surpasses all the Christmas glitz

We have always celebrated with restraint. We don't go overboard with decorations & food & I've had Christmases when celebrating anything is the last thing I've felt like doing. My children, for the most part, aren't touchy~feely sorts but for all of us, at the back of our minds, in the hidden places of our hearts, ghosts walk. We won't talk about it. We won't be sad & gloomy, which would be silly because our family isn't a sad & gloomy lot & certainly Mark was the life of any party. Heck, he often was the party! Just the same we will be acutely aware of the gaps where someone once was in our lives.

I'm funny about Christmas anyway. I find the way we celebrate peculiar. Certainly Christ was born but he came to die. Christmas was only a means to an end. Surely Easter should be when we break out the champagne & celebrate.

I am reminded of the closing Seder prayer: this year on the island, Next year in Jerusalem. This year our loved ones are celebrating with the promised Messiah. Next year...? None of us know what next year will bring. At the heart of Christmas lies the heartbreak of Easter & promises fulfilled. If not next year, one year. We can face the future with hope & confidence for He has given us the peace that passeth all understanding ~ even in the face of death, even in the midst of grief, & out of that peace flows joy unspeakable.

I have nothing to say except, your words are lovely and I feel, through your writing, your sorrow and your hope. Thank you for sharing your thoughts.

Thank you for sharing such deeply personal and emotional words. It is a source of strength and hope for others, as we all have losses to come to grips with as you said, 'if not this year, another year'. It is good of you to share your journey and your reflections. I am also sorry for your losses, I know that they are truly painful...

I have plans to go and sit on the beach and have a good howl this Christmas, and in January for Mums birthday, other than that it is 'business as usual'
3 of my Grandparents died when I was either heavily pregnant or nursing a tiny (perhaps this is why we didn't have 4 children?) and I have no idea how I managed then. I simply don't remember what happened. Selective memory of survival instinct?
Death would be fine if it didn't upset us so.
xc

The mind's a funny landscape isn't it? I have these quite glaringly sharp memories floating disembodied from any connection to anything else & vaste white deserts where there's a total blank. I wish I could plan to have a good weep & be done with it. It's being ambushed when I'm in the midst of something else I can't stand. Very disorientering. Maddening for me & everyone around me but I never could do anything the way I was expected.

"It's being ambushed when I'm in the midst of something else I can't stand. Very disorientering. Maddening for me & everyone around me but I never could do anything the way I was expected."

Since I lost my father, I've often wondered if there's a "proper" way to grieve, and if there is, I'm far, far, far from it.

Thank you for sharing your grief. I recognize it, and the recognition is a comfort. I hope you find comfort in knowing you're not alone.