Methinks you are my glass, and not my brother...~William Shakespeare, The Comedy of Errors

Dino is one of my twins, part of the great cosmic joke that is my life. You see I'm a bookworm. Give me a quiet cornor, a cup of coffee [chocolate if you're feeling generous] & a good book & I'm perfectly happy. Food is not necessary. I will happily bypass exercise. I am my own best friend. I have the writer's knack of peopling my world with congenial company & if they aren't real so much the better! My children think I'm quite mad. What's worse they were all made in a completely different mold.

Dino beat his brother into the world by a whole three minutes. I used to think he was a bit short the full quid as a result; not quite cooked. Theo would pass him the fork & we'd find Dino trying to insert it into the electrical outlet. Theo would never put himself at such risk when Dino was around to be put at risk instead. It might take two of them to move the furniture around so Dino could climb into forbidden corners but it was always Dino we found at the top of the pile. Then there was the day they drove the car. My friend was visiting with her little boy, also about 3. Half way through our coffee we realised it was rather quiet & neither of us had seen the boys for some time. We suck our heads out in time to see my friend's car kangaroo hopping into the scrub. One boy was on the floor working the peddles, one was steering & the third was attempting to change gears & direct! Yikes! It used to drive me to distraction. They were dangerous. I wasn't sure we would all survive each other.

I was relieved when they all moved into boats. Our bay is shallow & fairly protected & they could do fairly little damage to themselves or anything else. Rowing made them fit & healthy. I understood the pleasures of sitting in a blue puddle with a fishing line contemplating one's navel. I did not understand their aversion to books & a propensity for running all over the island as if long distances were a sprint in the park.

For some years they easily cleaned up at the inter island sports day for everything over 800m. The coach raved that Dino was one of the best natural runners he'd ever seen. Dino couldn't have cared less. He was not in the lest competitive. That would be Theo. Theo, nowhere near as gifted was far more determined & far more competitive.

My sons were practical children who have grown into practical men. They were hands on learners who now work with their hands. They are concrete thinkers. The abstract, the fantastical, the speculative is not for them. That is purely their mother's province. My attempts to impart something of God into their lives was met with skepticism. Where was my proof? What evidence did I have? They humoured me as obviously delusional. Poor old mum, her kids have sent her batty.

For years we rolled our eyes at each other. I 'm a Celt. A sense of *otherness* is part of who I am. Obviously it was not a part of who my sons were. I couldn't work out how I'd been landed with such aliens. My children know that my story telling leans towards *being on the imaginative side*, rather than literal. I am at home in the arts. Metaphor, simile, mythological allusions, obscure references are food & drink to me. The less plainly something is said the happier I am. I wallow in Song of Songs, John's gospel, Isaiah & Revelation. My sons wanted to know how Jesus knew there was a silver coin inside the fish!

So when the Holy Spirit began manifesting himself in Dino's life I was highly amused. This was so outside Dino's understanding of how the world works that when he hits a theological impasse he rings home. He expects years of studying, learning, meditating to be condensed into a bite sized pill that will explain the inexplicable. I keep telling him he needs to know God, not about God.

The pull on his life is growing stronger. He came to church with the girls & I on Sunday. He wants to join one of the cell groups & be involved in a bible study. Liddy is quite envious. She can't get to either because of living on the island & her work times but her direction is much clearer. She has been hashing things out with the Lord for much longer.

And in that most obscure & delightful of books, Isaiah, I hold fast to the promises of God for me & for mine: I will contend with those who contend with you, & I will save your children [40:25]...All your sons shall be taught by the Lord & great shall be the prosperity of your sons. [54:13]

I haven't told Dino. I'm not sure he's ready to cope with the fact that God talks back. 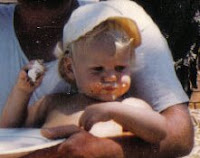 I don't have anything to say except I really enjoy your stories. : )

I'm with Dino...knowing God v. knowing *about* Him and all.

As a Mom, my heart's desire is to know that my children have a relationship with the living Lord Jesus. All of my children do but some have more intimate walks with Him than others. Naturally, now my prayers reflect that desire (to be totally surrendered. Jesus is LORD as well as Savior). If I struggle with that in my OWN life, I know that I need to pray that for them as well.

It's obvious that God is wooing your son to a deeper level. Because HE knows us so well, for He created us, He sees the bigger picture. He knows when the timing is ripe and whent the best time for harvest is.

"Behold I stand at the door and knock. If any anyone hears and listens to and heeds my voice and opens the door, I willcome in to eat with him and he shall eat with me." Rev. 3:20 (Amplified)

Believing Isaiah with you...
Connie

I must just say that your picture of your little blond boys is simply precious. How did you ever not spoil them rotten. Those big blue eyes are toooooo cute. : )

Wonder what God's leading him into? His pics are so precious.