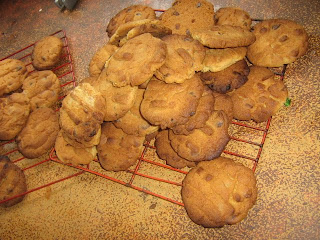 
It has rained so much that now we are home Ditz resorted to the kitchen. Bearing in mind the child can't do fractions on paper & her math has been a bugbear all year she calmly proceeded to double her recipe & proportionally replace walnuts with white choc chips. Nothing wrong with her practical math! Every ingredient she used she had to change a fraction. Nope, I had nothing to do with this ~ except give permission to use the last of the flour. Ditz also had to estimate if she had enough left in the jar to make her biscuits. There really is nothing wrong with her brains when she cares to use them. If only she would use them more often! Yes, the biscuits are very yummy.

I want Ditz to finish up Mara of the Nile & The Wave this week, do a math test & wind up the science then she can put up the tree. That has been Ditz's job for years & years though she is less keen now she is older than she used to be. 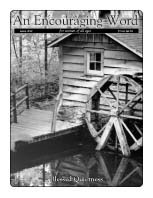 Meanwhile, behind the scenes while I've been running myself ragged with Ditz, Liddy has very sweetly sorted out a problem for me.


For several years I've received a subscription to An Encouraging Word. This is an ultra conservative Christian Women's magazine & those who know me well tend to raise their eyebrows at it but while I don't always agree with everything in it I very much appreciate the biblical basis & sound teaching. Nor have I ever found it to be legalistic. I also got the companion mag, A Homeschool Digest. Those who have read here for a while, through 2 crashed blogs, know that I travel a lot & that I go nowhere without reading material. These mags were great for short reads on the boat as regular women's mags drive me completely batty with all the gossip & body obsessiveness. They were the only magazines we subscribed to & the only money I generally spent on myself so when my magazine didn't arrive when expected I contacted the Aussie suppliers.

The Aussie suppliers are no longer supplying & the supply depot has reverted to the States. Ouch. I e~mailed. Time passed. I e~mailed again but I was busy [when am I not] & 12 months later it suddenly occurred to me that the magazines still hadn't arrived! Now I know this is a small home business & that it would have been very easy to lose an overseas subscriber in the shuffle, especially as they had terrible sickness in the family, so I was prepared to wait...& wait. Well, actually, I kept forgetting. Heck I've hardly been home the last month & my whole year has been crazy.

I missed my magazines & had reread the ones I had to death but eventually Liddy noticed the big brown envelopes were no longer arriving in the mail. Enquires revealed I'd been waiting 12 months. I know, I know. My sense of time is just not that good. Liddy started nagging me to sort it out. Huh! When? I think she reads them on the sly myself but she won't admit it & says she doesn't like them but she certainly read the article on Wess Stafford. Anyway while I was going crazy driving Ditz in & out of Brisbane Liddy e~mailed herself. She won't let us read the whole e~mail; she says she got a little shirty but she certainly gave them a sob story about how little we have & how much I enjoyed their mags & could they pretty please sort the problem out! Wow! I am happy to report that the problem is sorted & back issues are on their way. I should have them in time for our annual break with mum & given that it invariably rains in January they will indeed be a blessing.

'Don't ever say I don't love you & do things for you,' Liddy told me as she showed me the e~mail. Would I say something like that? I love my Liddy. I really, really do. She's one of my practical children & I need practical people in my life.
Posted by Ganeida at 10:41 AM

Your poor postie won't know what''s hit him/her ;o) Rather impressed with Liddy there though, so nice to have your own secretary and a chef in residence! Also personal entertainer life is good
xc

Mmmmmm cookies!! *grin* ....Cindy seems to have that same odd ability to juggle fractions when cooking yet hide under the table from them in her school work LOL

Yay for fixed magazine subs - I've never heard of those ones, must check 'em out!

I find Eve doesn't know her own brains either. Maybe she just has fraction anxiety. When it comes to fractions on paper, she freezes. But she can double and triple recipes in the kitchen, too! I know that sigh of relief, Ganeida!

Liddy, thanks for helping your Mum! You sweetie. *sniff*

And cookies? We're doing that too! What a coincidence... :p

MrsC: I *know*! Must be something in the air...?;) Liddy made me sniffle too ~ to everyone's absolute horror. lol.

Hmm, everyone, I'm pleased to know it's not just Ditz & I who are spectacular failures in the fraction arena. Like Algebra it just seems silly to me, which isn't helpful. I think we will skip algebra & stick with geometry, which for some strange reason I can actually do.

Practical use of fractions is all she'll probably ever need anyway. If she can make cookies, it's all good!

Those look so yummy! My hardest part about math was always wondering when I would actually use it. ;) Looks like it gets easier when you just do it without calling it math.