"Only in souls the Christ is brought to birth, And there He lives and dies." -- Alfred Noyes 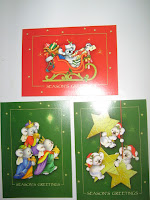 This year's cards have koalas on them. For some reason tourists seem to think these beasties are cute & cuddly. I should like to point out they climb trees & have a formidable set of claws! They are also usually pretty grumpy customers & any school unlucky enough to find one on the premises has to keep the kids well clear as they will attack & are quite vicious fighters. They make cute cards though. 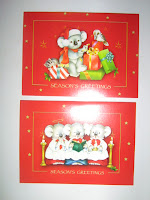 Several of our species are renowned for crying like babies: koalas, possums, & curlews amongst them. I grew up with possums. Before we moved into the house my parents built we lived in a shed on the property & each night as we fell asleep possum eyes glowed down at us from the rafters. They are pretty noisy & used to chase each other up & down the roof. Every so often there would be a wild shriek as one overshot the mark & hurtled into space.

My mother used to put out scraps for our regulars. She still tells the story of hearing a knock at the door one year & opening it to find no~one there. The second time it happened she was pretty cross about it until she noticed mama possum. It was mama possum doing the knocking so she could show of her brand new bubba to mum.

The wildlife is opportunistic. One year we had hordes of kookaburras congregating on the t.v antenna. It was the best perch for diving into our pool but it created an awful lot of snow on our screen & I can't say we were all that impressed.
Just the same it seems daft, given our weather, to send out cards wreathed in mountains of snow when the mercury here is in the 90'sF & the humidity has finally reached 100% in a precipitous deluge & some themes are universal: stars, wise men, presents carol singers. OK, so they're koalas but hey, a little credit for originality!

You know I think the koalas are adorable *grin* ....I think the possums are pretty darn cute too! :-D

What are kookaburras? I think I must be squeamish because I don't think I could have slept in a room with possum eyes staring at me!

I live where we have the standard Christmas look. I have lived in two warm states, California and Georgia, and for me it wasn't the same. Your tropical climate would kill a northerner like me. We are made to survive the cold. : )

The cards are very cute, btw.

Kookaburras are a biggish bird. Will find you a pic.

Awww. Those koalas are so cute. LOL

I wondered about your unique perspective on a "White Christmas" when you're Down Under. Thanks for addressing my unspoken curiosity. My kids thing koalas are absolutely adorable. I think they'll be quite astonished to learn the animals can be quite vicious. In any case, they are cute as a button on your Christmas cards, even sans snow!