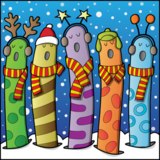 A lovely thing about Christmas is that it's compulsory, like a thunderstorm, and we all go through it together." ~ Garrison Keillor

For 20 years Christmas officially begins for us with the Island carol service. Traditionally this in held in the Anglican hall, a high set, old~fashioned wooden building with a set 0f 20 rickety steps, small windows & fans that barely move the languid air. Into this small, cramped space half the island attempts to squeeze wielding insect repellent, mozzie coils & wads of paper to be wielded as fans. The other half stand on the steps & smoke.

Ditz, who has yet to master any of her times tables, studiously applied herself to being able to rattle off the names of all Santa's reindeer for every year Joyce asks the same lot of questions & every year we are the only one's waving our hands excitedly in the air. Well, Ditz & I wave our hands excitedly while Liddy pretends she doesn't know us. I won myself a packet of chips [which Ditz gave away to a 2nd cousin] for knowing whose birthday we were celebrating! Ditz won one for knowing where He was born. Liddy ate a packet of chips & pretended she didn't know us. Meanwhile Ditz waited anxiously for the reindeer question. She waited so anxiously that twice she had her hand up frantically before Joyce had got around to even asking her question & twice she was deferred. By the time the question actually arrived Ditz was practically popping out of her skin. Joyce tried to warn her that she had the list right there & would check but Ditz barely heard her, frantic to get all 8 names out before she forgot one!

I think we rather spoiled Joyce's party. In the twenty years we've done his nobody else, child or adult, has managed all eight names & Joyce has taken great delight in informing us all! I also think she mistook Ditz for Liddy remarking that it had taken 18 years for the child to learn this. Both Ditz & Liddy were mortified, if for different reasons, but Ditz got another packet of crisps which Liddy eyed off hungrily.

Both Liddy & I were starving. Very, very occasionally Dearest gets a hankering for a take~a~way meal, which can be dicey on the island. There are only two places at present where you can get meals unless you want pizza: the RSL or the Bowls club. Of the two the Bowls club usually has the better reputation but Dearest wanted a seafood basket & Ditz just wanted a hamburger so we ordered that from the RSL & went on to get Liddy & I chicken Cesar salads from the bowls club. The chef has changed but a Cesar salad that is mostly iceberg with a few stray pieces of bacon & chicken, the odd crouton & a poached egg is one thing; anchovies hidden amongst it is quite another! I can't stand seafood & at the first taste I was spitting a mouthful of food over the verandah & gagging like mad. If you don't like seafood, & I don't, anchovies are the worst thing out. Liddy doesn't eat seafood either so we packed the meals up & back we went to complain.

Liddy was not a happy Liddy. I was ho~hum until the chef tried to tell me anchovies were standard in a Cesar salad. Then I got steamed. Cesar salad is one of those things I order a lot; it is light & filling & usually fairly harmless though I've never had a poached egg over one before & certainly I've never had anchovies. Who in their right mind adds a seafood cocktail to chicken?! Liddy didn't go there. She pointed out the anchovies were an optional extra & shouldn't have been there at all. We were offered another meal but by then we were out of time so wanted our money back instead. The upshot was we went to carols without having eaten. I'm a light eater & used to erratic meals but Liddy is what's known in the vernacular as a 'good eater'. She can mow down half a cow with no problems & she likes her food at regular intervals. We laugh like maniacs at all the people who suggest the child's anorexic. Liddy loves her food & appreciates it in ways that totally escape me.

Which reminds me, I want breakfast & as it is blowing a gale, overcast & chilly I will appreciate something hot & that 2nd cup of coffee. Tomorrow I must remember to check the t.v program, which I rarely look at, & see if Ditz is actually going to be on t.v this Christmas. It will certainly solve the problem of which channel's carol program we watch.

oHHHH how I loathe bad customer service, even more than the wrong meal, it isn't hard you know , well I know YOU know...
Go Donner and Blitzen and Dasher and Dancer and Prancer and Vixen and Comet and Cupid.

Is that all? do I get prize?
xc

I've been reading bits of your blog, and quite enjoying your writing! I'm glad Ditz knew where Jesus was born. An old friend grew up in the Pennsylvania town of Bethlehem and worked in a tea room, where the occasional tourist would stumble in and ask for directions to the site of Jesus' birth...she would instruct them to take a left at Main Street!

You know, the one time my mom got food poisoning it was in Australia. Some mushrooms at a place called "The Black Stump." Which sounds like a horrid place but it didn't seem like it really when I was there.

Oh that is so funny about the reindeer names. I only know them from the song Ruduloph the red Nosed Reindeer.

I love how you said you all waved and Liddy tried to pretend she didnt know you. THat so sounds like my momn and sisters! LOL

I wish I could eat and still be thin! sigh

Hojo's, you may have a packet of chips.[that's all we got :)] & congratulations. As you can see from below you are in an elect crowd as Rudolph was not one of the original reindeer. lol.

MrsC. You've been here?! We must chat. Where did you visit...besides the Black stump? Someone must have been picking mushrooms down the back paddoack if your mum got food poisoning.

MrsD. Lovely to have you round again! :D If I remember correctly [& I expect the Hojo's will know] the original reindeer names come from *T'was the Night Before Christmas...*

I shall check the mail forthwith ;o)

Ganeida, I lived in Pymble, a suburb of Sydney, for about two years in the early 80's. I went to the Opera House, went snorkeling on the Great Barrier Reef, went to Ayers' Rock, the War Museum and all that touristy stuff as well. :]

Well, I'm guessing it was the mushrooms. I think they serve steak there too? I forget. I just remember how very sick she was after. I ate something she didn't, she was the only one ill all that week.

MrsC, as a Sydney girl I actually know where Pymble is! :) I had friends at PLC [Pymble Ladies College}, one of the snootier private schools.

I also had a friend who worked in the ticket office at the Opera House so I always had tickets to the dress rehearsal for the ballet & theatre, which I loved. If I'd been keen I could have had them to the opera as well but opera is so not my thing. I leave that for Ditz.

As cities go Sydney is one of the more livable ones I've been to: good climate, Plenty of open space [I lived just across the water from the Royal National Park], & fairly navigable by public transport.

I think the grasses and trees and wildlife there were beautiful. :]

I went to public school there. Gordon West and then Turramurra High School.

Lucky you. The Turramurra area is gorgeous. It gets lots of rain so rarely gets the *brown* look some parts of Sydney gets. The Girl Guides have a camp site out that way & I spent a lot of camps there ~ often damp round the edges.

I also think you were lucky with your primary school. It seems to have been unusual & ahead of its time in recognizing the Aboriginal aspect of Australian culture.