According to English tradition, trifle is a dessert of sponge cake, soaked in wine, covered in macaroons, nuts and whipped cream, etc. ( In this case etc is very important) 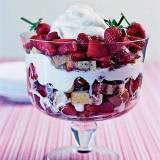 I like trifle. It is one of those odds & ends deserts that can be elaborate & expensive to make or very cheap & very simple. I like it either way. The argument in this house is not over whether or not we'll have trifle but how we'll have it. Traditionally it is made with port or sherry or Madeira but half my household does not like alcohol spoiling the taste of good food; naturally the other half thinks alcohol enhances the flavour! It is also traditional Christmas fare in households like ours that don't want plum pudding in the middle of a broiling Australian summer. I don't eat anything with *squashed flies* [raisins, sultanas, or most other dried fruit] in it so you won't find Chrissy cake or plum pudding at my table. Most years you will find trifle, with or without alcohol!

So here is my mandarin custard trifle recipe.

1/4 cup of sweet sherry [or cointreau]

6 mandarins [I use 2 tins of mandarin segments instead or I'd spend all day pulling pith off. I do not like pith!]

Fresh fruit of choice [I like kiwi fruit, raspberries, strawberries & nectarines with the mandarin flavour]

Make the custard & set aside to cool. It needs to be quite thick.[Don't use a bought pouring custard!]

Cut the cake into 1X1cm slices & arrange over the base of a serving bowl [8 cup capacity at least!] Drizzle your liquid of choice over the cake. The mandarin juice from the tins works well if you don't want alcohol. Then pour the partly set jelly over the cake & refrigerate until set.

If you use fresh mandarins peel well & break into segments. If using tins make sure they are well drained. Place the mandarins over the jelly in the dish. Spread custard evenly over the mandarins. Top with cream & refrigerate overnight. Serve topped with the fresh fruit of choice.

Traditionally [there's that word again] trifle is made in a large glass bowl so that the different colours & layers are displayed but it also looks stunning done in individual wine glasses or serving bowls.

The English have enjoyed trifle for over 300 years. The word itself dates back to the medieval trufle from the old French, trufe, something of little significance... Anyone doing a medieval study? For everything that's said about English cooking they do some things suburbly well & trifle is one of them. It may have started life as a way to use up that stale cake & questionable fruit but it has evolved into something to delight both the eyes & the tastebuds.

No, I haven't made mine yet. Liddy asked if I would wait till she finished work today as she wants to make it with me. It is one of those recipes she's seen made but isn't quite sure she could do herself yet. However it is very simple to do though it does take a bit of time making the jelly & custard.
It is Christmas Eve here so I wish you all the blessings & joy of the season: good friends, family around you & the Christ light within you. Ganeida.

Our favorite trifle, in American terms, goes like this:
brownie chunks, sliced strawberries, chocolate pudding, cool whip; repeat.
Like everything else, it's better if you use "from scratch" brownies and pudding - and debatabley, use real whipped cream instead of cool whip - but it gets eaten no matter what.
The day you make trifle, all the flavors and textures stand apart. The day after it's a delightful mushy, creamy whole. Perfect for hot summer days.

This even looks beautiful.
I have never made it, but I may have to try it now.

Wow! Thanks Ganeida! What a lovely wonderfully scruptious looking dessert. It looks right up my ally as my favorite desserts include fruit and cream! It was so nice of you to include the 'history' lesson. I am going to let Sienna read this post and then we are going shopping! The fresh cherries around here are so great this year they are just bursting with juice AND very cheap for the holidays. So I am going to try your trifle with fresh cherries!

So excited! Thanks again and MERRY CHRISTMAS!

Merry Christmas to you too dear friend!

Merry Christmas to you all, peace and joy

This looks tasty. I bet the raspberries go well with the mandarins. I'd like to try this, especially as it is unadulterated by chocolate. Never did understand why anyone would want to smother fruity sweetness with chocolate.

I love trifle. Thanks for sharing your recipe.