We have birds. They arrive in droves amongst the flowering gums. They bump our windows after insects. They corroboree the full moon at night & serenade the dawn. I can name over 200 different species just standing on my verandah & watching who comes & goes.
Birds are God's messengers; small angels with wings. They exhult in the falling rain. They sing praises for each morning & gives thanks for each berry they find. But they only sing when flying or perched high, never when they are on the ground.
I love having so many birds about the place but I'm not very keen on handling them. See their bones are hollow so you get anomilies like the bones of a pigeon weighing less than its feathers! And a pigeons feathers make up 10% of its body weight. On the other hand an ostrich's eye is twice the size of its brain & weighs 3.3 pounds. Obviously thinking is not a high priority. 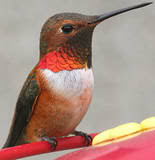 Hummingbirds though, they can fly backwards. They are the only bird that can do this. Neat party trick.
Some things are just plain weird. Do you know what you call a group of chickens? A peep! Seriously. I swear it's true. A group of geese on the ground is a gaggle but once it's in the air it's a skein. And speaking of geese, the goose was the first bird domesticated by man. Larks though! A group of larks is called an exhultation! But a group of ravens is a murder.
Then there is the whole sleep thing. An albatross can fly while asleep. Ducks on the outer edge of a group sleep with one eye open. Those in the centre of a group feel safe so close both eyes. And birds dream. They dream about their songs & have dream rehearsals ~ resulting in better songs the next day. I don't know how the University of Chicago verified this but it really makes you think some people don't have enough to occupy themselves!
Roosters can't crow if they can't fully extend their necks & a ducks quake doesn't echo & no~one knows why. And I really needed to know it takes 40 minutes to hard boil an ostrich egg!
Yep, birds are fascinating but 90% of all species that have become extinct have been birds; 109 species in total. Like dodos. And can I count the Phoenix?
Posted by Ganeida at 1:24 PM

Oh my I guess I'll just hve my kid read this for thier science today!

Have you ever seen so many typos in one tiny sentence. Mercy!

Hi Ganeida,
Hummingbirds are an amazing wonder of God's creation.

I was sitting on the steps out front of our home this morning, doing my quiet time, and all of the birds were so noisy - magpies, sparrows and honey eaters - it was so beautiful.
Blessings,
Jillian
<><

200 bird species and whales too ? Where do you live Ms.G ? The lost garden of Eden ?? Sounds lovely. Makes me feel a little envious.

Did I ever tell you the story of the hummingbird that snuck into our car one hot summer day? I was merrily driving along when it suddenly flew up from under my seat... I almost took the car straight into the ditch! Louisa gently took it into her hand, where- amazingly enough- it sat in a state of perfect calmness (or perfect terror!) We turned right around and drove back so we could return it to its home area... it sat on Louisa's open hand for a full minute before flying away. Amazing jewel-like creature, it was...

Ah, I love birds. There is something about them that both relaxes and delights the spirit. I have several bird feeders about my place and I greatly enjoy watching them. I enjoy the birds so much that the cats aren't permitted onto the patio unless they are wearing bells to warn the birds.