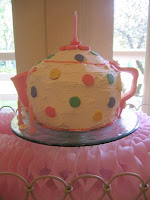 Some people are just very, very clever. I won't tell you what would happen if I tried something like this but it's impressive, don't you think?

Anyway, seeing as birthdays are in the offering today, today's trivia is birthday trivia.

Not surprisingly birthday celebrations have their roots in paganism. All those lovely prezzies? ~ To ward off evil spirits. The cake aglow with candles? A gift to the Greek goddess Artemis. Cards? Well, the ancient Egyptians & Chinese used to send greetings on papyrus rolls to special loved ones then a century ago, when it was common in England to offer personal well wishes to the birthday person, people who couldn't do that sent their apology with a *birthday card*.

Later on today, when our boys get home, we will sing Happy Birthday to You. This song didn't start life as a birthday song at all & the famous bit that is now sung all over the world is actually the chorus. It was written by 2 sisters, Mildred J. & Dr Patti Smith Hill in 1893 & first published in 1935 so it's not even all that old. It is, however, famous for other reasons. Marilyn Monroe notoriously sang this to John F. Kennedy while he was president & it is the first song ever sung in outer space. On March 8th, 1969, the Apollo IX astronauts sang it, out there, so to speak. Despite being the most recognisable song in the English language it does not belong in the public domain & is still copyrighted, so you know, personal use only or you're up for about $10, 000.

Worldwide more people are born in August than any other month [Should I tell Ditz she's common?☺] but in the States October 5th is the most common birthday. Bit of a worry that. Conception would be New Year's Eve!

Technically, we celebrate the *anniversary* of our birthday, but I suppose I am only caviling here. ;)

I hope all have fun at the celebration.

LOL, beautiful cake! And no, I didn't know all that. I think I need lots of prezzies to ward off evil spirits next year!!

Where do you find out all about the trivia that you post?
Blessings,
Jillian
<><

Jillian: lol I have a mind full of stray information but if I'm not sure I type my subject into google & add trivia after it. all sorts of stuff comes up, ☺

Another entertaining bit of information. I heard awhile ago that there was threat of lawsuit over public sing of "Happy Birthday". I don't know that anything came of it.