Wherein I ramble about this & that... 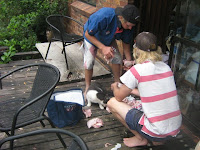 A lot of people like snow. I find it to be an unnecessary freezing of water. ~Carl Reiner

Early this morning, before the sun was properly up, the boys were breathing down my neck to get the weather radar up in the vain hopes that enough rain was on the way that they could head off fishing for the day instead of to an early morning boat & a long day of working in the wind & cold. They were out of luck ~ but not for want of trying.

It hasn't been a pleasant day. Miserable in fact. Issi hogged a doona all for himself & refused to budge & the poor old heater has barely taken the edge of the chilly air. I am about to turn the oven on & do a Shepherd's Pie for dinner. Ditz will just have to not be vegetarian tonight.

Poor old Ditz hasn't really had much of a break. The weather has been simply appalling all holidays & it is back to schoolwork on Monday. Term time of course means all the music is back under way again & there is another MBC afternoon first up ~ with drinks & canapes after! Really! I am appalled. I mean, I pretty much have to go & this is one snooty, snooty school. I really shouldn't go dressed like the rag lady but I have yet to figure out how to stay warm & be stylish. Actually I've never figured out how to be stylish. Clothes & I don't have much to say to each other & so long as I'm decently covered, comfortable & warm I don't worry too much ~ an attitude that appalls my mother who always looks wonderfully put together. Mind you, I don't usually have much call to be dressed up to the nines.

I've hardly stuck my head outside at all these hols. I've been avoiding the shop. Kids everywhere & they will get under the covered area where it's nice & echo~ey & screech like banshees while their fond parents look on indulgently. Whatever...but my poor head can't handle the noise. Then there's the packs wandering down the middle of the road who move for nothing & nobody. Hello? The road is for cars! OK, so it's not just kids that do that. There's one old dear who drags her trolley right down the middle of the road too & she will do it in the middle of the night all dressed in black. Gave Dearest a very nasty fright.

I could really do with a dose of blue skies & sunny warmth right about now. It might improve my frame of mind. Just as well I don't live somewhere the sun don't shine for 6 months of the year. I would be perfectly miserable & no~one could bear me. Hrumph! I do NOT have attitude ~ just a little hiccup in the works.
Posted by Ganeida at 10:32 PM

It IS cold today, isn't it?
I don't think my toes have truely been warm all day. Hmm - maybe I should be wearing 2, or 3!, pair of socks until September.

I will trade you weather! I am sick of 110+ degree days, and 90+ degree nights. Just one night I would like it to be cool enough to eat on my patio comfortably. I am ready for summer to be over, even though fall is not nearly as beautiful here as where I grew up. But seriously you figure a way and we'll trade weather...you can have our heat and I'll happily take your cold be it cold and rainy or cold and snow or just plain cold....I'LL TAKE IT!

here on t'other side of the world we have summer. although i do feel compelled to tell you that it is quite cold and rainy here nonetheless. if we hit 65 today, i'll be surprised. but that's a-ok with me... i am not a hot weather person at all. my face gets all beet red and sweaty once the temp tops 75 or so, lol. and due to her illness, amelia is actually allergic to the sun. i'm with birbitt, i'll take cold and rainy over hot any day!

as long as i have warm cozy sweaters and hot drinks at the ready that is;)

oh and have you ever tried "good shepherd's pie?" it's a vegetarian version of shepherd's pie. i can get you the recipe if you'd like☺

It's hot here today - but that's ok. I take it when I can get it (said after 7 months of winter). I'm spending the day weeding the garden.

I'm with you on the clothes issue. I always look like a frump, no matter how hard I try. At least I feel like one. Most of the time I don't care, but I hate being "out of place" - especially when the crowd is snooty...as you've said.

Hi Ganeida,
Perhaps you should consider a move south? lol

We have had a couple of beautifully sunny days, perfect for working in the garden, and yesterday there was virtually no wind, either.

Tomorrow's supposed to be raining though, so then I might not be in such a cheery, happy-go-lucky frame of mind, especially when we have to go shopping and pay the bills. My hair goes like an Afro when it gets wet. :P
Blessings,
Jillian
<><

Hmm...well, blue skies help me every time. I just feel better with beautiful weather. My body is like a weather forcaster...lol.

Can't help but say I relate to your attitude with clothing. I just get dressed each day. Rarely do I change what I wear according to what I will be doing or where I will be going. I had enough of that when I worked within private schools and I guess it is some of the Quaker in me as well showing. My kids are also oblivious to name brand clothing being homeschooled. They listen to their PS cousins and are totally confused why they have to have certain sneakers or brand jeans. Wheww...thank the Lord for that one as it surely saves us money. In fact, home schooling is less expensive we have decided than sending a child to public school--with the knowledge and experience of what we went through with our son. Wow......