Whisper when I'm near her... 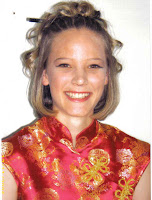 After a good heart' she said, 'the least a woman can do is pick a face she fancies. Men's so much alike & many so sorry, that's the very least.' Jessamyn West

My Liddy is absolutely gorgeous, both inside & out. People are attracted to her. That's just the way things are. Drives Ditz crazy but she loves Liddy too so she has a conflict of interest.

Boys have flocked like bees to a honeypot but my Lid is fussy & she took to heart [waaay back in grade 4] my lecture on *special* friends being for adults & not for children playing at being adults. She has waited for that special someone to enter her life.

I'm not sure I'm ready for this stage of life. It makes me antsy. Women's lives are so often determined for good or ill by the man they choose & I have some reservations ~ & not about the young man concerned. Nope, I know my Lid & the first thing to know about Lid is that she's as malleable as butter & as sweet as sugar until you run up against her foundational beliefs & then all of a sudden you find yourself shipwrecked on an iceberg & sinking fast.

The second thing to know about Lid is she's a debater. And she never backs down. And she's my daughter. The first rule of debate in this house is support your argument. Many an admirer has run aground on this one. I never debate Liddy unless I'm absolutely certain I will win because she never backs down & she never concedes defeat. Months after a debate she will resurrect it having found new evidence to support an untenable position. Like I said...Can you imagine living with that?

I have a stop in my mind but is it just the reluctance of a doting mama to let her grown daughter fly the coop or is that my 6th sense sending alarm bells ringing because something is not ringing quite true?

Frankly I wouldn't marry Lid for all the tea in China. Most of the time it's smooth sailing but there are hidden rocks, strong undercurrents & dangerous eddies. Liddy is nowhere near as sweet & indecisive as many people think she is. She does not bend. She does not give in. She does not concede defeat. In certain areas there is no such word as compromise in her dictionary. Ok, I know none of us are perfect but what do you do with the child who describes herself as the perfect daughter?

I feel for this boy, I really do. I'm not sure he's strong enough for Lid & living with perfection is a real trial. I should know. I've been doing it for 20 odd years.

It seems we have stumbled onto some things that the Princess and Liddy have in common.

Ya know, I don't think I'd marry Liddy either LOL! She's a beaut though, mama, you did well. I like the hair in this pic, so mature!

Liddy is gorgeous.. but then I think all your children have just the loveliest faces (they all favor their dear mama, I think. And I am not kidding there honey!)

I know exactly what you mean about having reservations... both in wondering if this *person* is actually worthy of your wonderful daughter and in doubting whether they truly know what they are signing up for! us mamas know our children so well- we are the ones most fully aware of the full array of their delights and strengths. but we are also the ones who can describe the full extent of their weaknesses and faults. Many people think that we mamas are blind to our children's faults, but that is absolutely not true. We are very aware of every nuance of their faults- we just know that their strengths far outweigh them.♥

Oh, that girl is a stunner! I had to laugh and laugh at the comment that she describes herself as the perfect daughter! :) Sounds like my youngest daughter....
I think I am a bit like Liddy in that I don't concede either. Poor Mr. Britwife.

How beautiful your daughters are! I enjoyed this glimpse into Liddy's personality and I say go girl that she does have her own mind. Love has a way of teaching one how to yeild to one another....in time. We will soon enough be entering into this stage with my oldest. A bit confusing to me, as I feel I just brought the screaming newborn home from the hospital. Time warp!

Why have I not linked your blog on mine as of yet? May I?

Jan Lyn: Please, feel free to link. I have NO idea what that means but by all means...lol
I know what you mean. How can my baby be big enough to be thinking about a life mate?

Britwife: shhh. I wasn't saying where the child inherited these atrocious habits! ☺

As always Diane, our minds seem to be in tandem & you've hit the nail on the head again. That is it exactly. Everwhere that boy goes he has people bailing him up telling him how special Liddy is & what will happen to him if he ever makes her cry. OUCH!

MrsC: I'm so pleased!☺ That's Liddy's graduation dinner pic. My mother made the lovliest Chinese type top which Lid wore with black plants. She looked absolutely stunning & unusual & exotic but she towered over Theo, who partnered her!

Seeking: Now in what ways would that be? ;)

Thanks Ganeida...it will be so easy now to click on your site from my blog too.

Well, putting aside that both are eye-catching, it would be that never backing down thing. Once my child has something in her head and heart, it is most difficult for her to accept anything contradictory, but that also lends to steadfastness in her faith, which pleases me.

I do enjoy reading when you glow about your lovely offspring :o)
lovely stuff
xc

still wondering what happened to the 'drowned' girlie?