All fantasy should have a solid base in reality. Max Beerbohm

We are in the depths of winter, not, I admit, an icy northern winter but cold enough by our standards to have us seeking those sunny nooks out of the wind with a hot cuppa & a good book. Which is what I was doing this morning while trying to convince Iss, who had something else entirely in his mind, that he really wanted a nice warm lap when I happened to glance out my window... 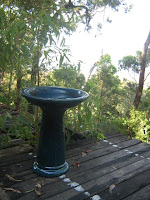 Months & months back I purchased this birdbath & it has sat on the verandah where a gum tree is growing through the slats for all those months pointedly ignored by every bird in the vicinity. It is a lovely birdbath with pebbles at the bottom & clean rainwater filling it to the brim but unused for the purpose for which it was acquired. Until today. Today the little brown honeyeaters found it & there was a great fluttering & chirping in & out of the gum tree as the birds took turns to hop in the water, splash about a bit & scoot back into the tree to dry off. I was charmed. Now they have found it it is likely to be in constant use & we will get the daily delight of watching the antics without frightening off our visitors.
This is not our only birdbath but it is the one easiest to watch visitors come & go.
I watch almost no T.V these days. T.V has got to be the greatest annoyance ever invented but few things annoy me more than historical inaccuracy. The exception is mythological inaccuracy. Our t.v screens have been besieged by a new drama ~ Merlin. Now, I will, if I must, tolerate the Arthurian story being transposed into Medieval neverland because most people know some version of Le Mort d'Arthur but I really take umbrage when people change the mythology completely. It removes great chunks of the plot. What's more it removes the more interesting chunks of the plot. Arthur's downfall is implicit in his conception & there are so many layers that suddenly disappear when you meddle with the original storyline I can't believe anyone at all would do it ~ but the creators of Merlin have! Unfortunately the rest of my house adores this show & remain untroubled by the glaring gaps in logic. I can't watch without getting riled because, frankly, Uthur should be dead, not ruling Camelot, & the supposed dragons were under Vortigern's castle in the Welsh marches & symbolic of something else entirely & far more sinister.
Fairy tales, fantasy, is, or was, the stuff of nightmare & far darker than our modern minds allow. Prettied up & sanitised much of their power is denied because the thing with so much fantasy & the reason it has always had such a hold on my imagination is that it is in this realm the bare bones of Christianity are exposed. It is in the mind the war for the soul is waged & won or lost. Fantasy is about choices for good & evil, about the consequences of those choices, about the power of evil & is corrupting influence & about fighting for what is right & good in the face of overpowering odds. Nope, nothing to do with actual reality. When you trivialise something like this you lose so much. There's a reason I like Revelation so much. ☺
I don't like the cold. I particularly don't like being old & cold. My joints are seizing up & I am creaking like a rusty old windmill in a stiff breeze. It has been worse since I got one of those obscure mozzie borne diseases that give you fever & chills & funny aches in the joints. I think twice about paddling round in the yard when the thermometer starts dropping but this afternoon there was a little window of sudden warmth & I rushed outside to deadhead the basil which is raging uncontrollably through the tomatoes & strawberries, sweep the path & rake up the leaves round the firepit before the mercury took a horrified look round & noesedived, plummeting towards zero as fast as possible. It's not fair. We have passed the solstice. The days are growing imperceptibly longer. They should be getting warmer too but they are not. I swear they're not. Brrrr! I do not like winter.

It'll warm up soon, but yes, it does get colder after the solstice before any warmth really is noticable.
It's lovely to hear you're getting to enjoy the bird antics in your birdbath. That must mean hope for us. I positioned our birdbath near the feeder, but it's gone fairly unnoticed too. I may need to move it over a little farther, perhaps near the buddleia?

That will be nice if the birds stay by that birdbath. Maybe they will bring friends, too. :]

We love our birdbath. Glad your birds found it. YOu will have hours of enjoyment now.

Sorry your weather is so cold. We are finally seeing temps in the 90's F!

alecat: it takes a while before birds will accept a new bird bath. They prefer some shrubbery or perch nearby as someone always seems to be *on watch* & sounding the alarm. I think you are farther south than we are ~ nearly everyone is ~ & I don't envy you at all!

MrsC@ so long as Iss doesn't take to lying under there we should be good to go now. ☺

MamaO: There is so much wrong with that show I had to stop before I got really wound up. lol I know too much about too much that is of little real us in theis world.

MrsD: I don't like hot either :( Temperate. Very temperate. Leaning towards cool but definitely neither hot nor cold. I do about 5 months of the year when I'm not whinging about the temps.

I am so thrilled the birds have found this birdbath. The one out the front yard is in constant use but we can't sit & enjoy that one. This one we can.

I'll trade......my winter for yours! I also enjoy watching our feathered friends enjoy their bath.

Hi Ganeida,
I will also trade our winter for yours! It gets down to -8C here in winter.

Our bird bath is viewable from the sunroom, although why it is called a sunroom is beyond me, for there's no sun at the moment.
Blessings,
Jillian
<><