Just a little bragging on Ditz. 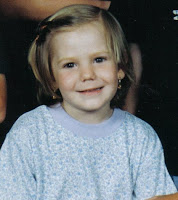 “The only thing better than singing is more singing.” Ella Fitzgerald

About 14 years ago I got given this little dynamo in a red~headed package & I must say the whole house thought she was just the ants pants & tended to spoil her terribly so it isn't a big surprise to find Madam is a supremely confident young lady. She got a large dose of smarts too & the bane of my life is dealing with a child who uses those smarts to pretend she's dumber than a dog's dinner. Frustrating? You have NO idea!

I'm still in a state of shock that what began as an adjunct to her math lessons has turned into the consuming passion of Ditz's life but I'm grateful, you know. I mean, what would I have done if she'd turned out to be a science freak or a math wizz? Actually it's the math component of her music that gives Ditz trouble. She spent her whole flute lesson counting yesterday. 3/4 time. I understand turning 3/4 into 4/4 but I'm blowed if I know how Jan could pick that extra note even from the other side of the room! He was onto Ditz every single time & every single time I suspect Ditz had temporarily spaced out. Then at the end he tells the child she's doing really well; she just needs to learn to count!

No matter how hard Jan is on her or how often he pulls her up she just nods her head & tries again until she does what he wants. If I tried that with her math there would be a flood of tears. Ditz was pretty pleased with herself by the end of her lesson & I was pretty pleased with her too because she had worked hard & 30 minutes is a long time for Ditz to stay completely focused.

I think I suffer from the general idea in western society that music is a nice enough hobby but not something you do for a *real* job ~ or something. I mean, we didn't do music for music. We did music for math & because of that I chose an instrument for Ditz to learn; piano because my dear friend, Sian, was prepared to teach Ditz & there wasn't another music teacher of anything on the island in those days. Surprisingly Ditz actually likes the piano. When Ditz declared she wanted to learn violin, viola! God provided a violin teacher. Ditto flute. What none of us ever seriously considered was voice.


Initially I baulked at Ditz joining the school choir & when the teacher changed Ditz opted out because Ditz has always taken her music very seriously.

Then we literally fell into the Strawberry festival. We thought it was for instrument. It turned out to be for voice & that is how we met Alison & got involved in Vocal Manouevres & all the time I had in the back of my head how good this all was for Ditz's math. Perish the thought!

This is our second year with Vocal Manouevres & both years when Ditz has auditioned she's made the smaller elit choir & I've blithely put it down to the fact that Ditz is well behaved & respectful & you know, can carry a tune okay. I'm an idiot.

Alison doesn't just teach singing. She trains *vocal artists*. She doesn't have an ensemble of choir singers. She has *vocal artists* singing as an ensemble. She is now well enough known that just saying Alison has trained you will get you an audition. It is a really exciting time to be a part of the ensembles & naturally I thought Ditz was a pretty lucky bunny all round, especially given she hasn't had a proper voice lesson in her life.

So I'm quietly reading away in my corner, as I do, one ear sort of cocked for the , Girls, we have to lift our game, lecture [so I can reinforce whatever it is Alison wants at home] when I hear, I don't just take on a singer for a term; I take them on for life! Ditz was looking pretty horrified. Alison is pointing out everyone [except Ditz] does a half hour to an hour with her every single week individually before going on to say Ditz is incredibly gifted & talented musically because she is keeping up with that ensemble [& outdoing some of the others] despite the fact she isn't getting the same advantages. Shock! Horror! Gasp! Ditz turned a brilliant & unbecoming red but she was pleased. Words of affirmation are Ditz's love language. Affirm Ditz & she will do anything you want & she will take full advantage of the ad hoc lessons I am scraping together for her this term.

Getting Ditz back after she'd handed in her application form for private tuition was like being handed an open bottle of Champange after it's been thoroughly shaken. In a burst of confidence Ditz confessed she's felt under a lot of pressure to perform well & keep up just because she doesn't get private lessons. She's ready for that stretch now. I can sense that she wants more & is prepared to work hard. Twelve months ago Alison roaring at her & telling her what's what would have dissolved her into pure mush but twelve months & Ditz has decided Alison is a paper tiger she can deal with.

I'm just hanging on for the ride. I didn't sign up for this, you know. I signed Ditz up for a math lesson. Funny the way God works things out, isn't it?
Posted by Ganeida at 8:46 AM

life has a way of taking you in a direction you never expected. enjoy the ride! please excuse my lack of caps, i'm one armed.

ok girl, i actually got goosebumps when i was reading this... and i teared up. i know, i know, i know i've never even met the kid, but i have such a soft spot for her in my heart. it just makes me so happy that she is finding her passion and her "genius" is being appreciated and nurtured♥

How blessed Ditz is! Counting is also not the Princess' thing, but she still gets it. Aren't such talents amazing? I am in awe with you!

Sandra: I can't believe you took the time to comment one armed as you are! I hope you are healing well.

Persuaded: I think Ditz & Amelia are very alike. I feel an affinity for her every time you speak about her. ☺ Funny to make these sort of connections across the hemispheres!

Seeking: Jan keeps saying counting is most musician's Waterloo & the one everyone struggles to master. There are rare exceptions. Ditz was counting in choir too because the whole lot of them have totally screwed the timing on one piece...& then the sopranos moved it up a WHOLE OCTAVE!!! Someone wasn't reading! Because I'm not a musician myself I think I just take Ditz in my stride [which is probably a good thing☺] while other musicians get a tad excited about her. I can't believe the opportunities God has provided for this child who would not have thrived in the regular music development classes, which are heavily theory orientated.

How exciting for Ditz and all of you! So great she has found her niche.
I get to listen to the little one here playing harp. That is going well. My older daughter took piano for 5 years. How I wish she would stick with it, but NO now she is switching to the guitar. Well, to put it politely, it is a lot to listen to.
Consider yourself blessed! :)

Oh! How I wish we in "computerland" could here Ditz sing. I bet it's like the angels.... :)
Now, mind you, I don't know ANYTHING about music. But I do love to listen to a beautiful voice.
I am so happy that you are giving her this opportunity. You are a great mama.

Jan Lyn: it is exciting. I play an excruiting guitar but for sheer agony violin beats all. Ditz is getting better on that but she lacks confidence so it sounds ...well, weird.

Britwife: Alison says Ditz's voice is *flutelike* & she's ok enough that her brother recorded her singing & that was his phone tone for ages. If I was more technoligically adept I'd attempt to post something for you but I think 2 crashed blogs is enough, don't you?

Now, if you are a bit weary of putting sound on your blog, you could link on your blog. Being that you have a Google account, you can upload files to your Google website and place your link here. Most computers would have the necessary software to play it.

I have a google account? Who would have thought! ☺

Hi Ganeida,
Congratulations to both you and Ditz! Maths - she will learn. Music is a gift from God. :)
Blessings,
Jillian
<><