A Funny Thing Happened on the Way to The Forum.... 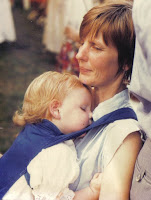 It was my Mum who got me into singing properly - she knew I had to do something with my voice because she knew I was talented. She was the one who pushed me into joining a choir all those years ago, when I was about 12. I remember she told me to start with the choir and just see where it took me. Susan Boyle.

Ditz was the cutest baby ever, a real huggable cutie, round & chubby & full of smiles for everyone but she had a temper! Boy did she have a temper & when Ditz lost it everyone within cooee knew about it. Ditz could hit pitches guaranteed to bend steel beams & she had an excellent set of lungs.

Ditz in the midst of a paddy would have the whole house begging me to do anything necessary to shut her up. In public she was embarrassing but on a boat it was unendurable. Ditz could clear space like nothing else but there are limited places you can go on a boat. In desperation I used to coo in her ear, a long drawn out hum & within minutes my funny girl would be screeching in harmony. I'd drop an octave & Ditz would follow me down until her screams turned into a harmonic, if extremely loud, hum. She never matched me; she always harmonised. It got to be quite a party trick but given Ditz's opinion of my musical ability she is mortified when I mention it these days. ☺

Ask anyone who actually knows Ditz & they always mention two things about her: she is incredibly noisy & she has the attention span of a fully~fledged gnat. This is not a good combination. It was one of many reasons to homeschool but extending Ditz's attention span proved more than a little difficult. It wasn't so much that she couldn't but that she was easily distracted & it was quite by chance I hit on something that seemed to work. Many thanks, Meatloaf.


Yes, I'm not too proud to admit I owned a copy of Meatloaf's melodrama, Bat out of Hell ~ or that I rather liked this particular album. Ditz liked it too. No the lyrics aren't the best but at the time neither of us was actually listening to the lyrics. We used to dance round the kitchen to this song & Ditz, being Ditz, made far too much noise for us to hear much of anything but the driving beat. It came in handy while trying to explain the vagaries of counterpoint to Ditz because I didn't really understand them myself but I pointed out it was a bit like the end where 2 singers are singing two different things & to drive my point home I got Ditz to sing one part while I sang the other. Not the best sound! lol.

But I discovered something. Ditz thought it was fun. It became our standard game as we drove round the island because Ditz could barely make it round once when we began but over time she learned to ignore what I was doing & focus on her part until both of us dissolved in giggles. Now Ditz rarely has problems holding her own part in choir & I must admit I get a dreadful glee out of that fact when I think of the 2 of us careering round the island screeching out Meatloaf at the top of our lungs. Just like I snigger every time Jan or Althea or Alison has Ditz doing a difficult part over & over & over because each & every time I have this mental vision of Ditz's first piano lesson : I can't, said Ditz. It's too hard'; I'll never be able to do that. And every time she got a new piece we heard the same sad refrain ~ until we pointed this out to her! Now she's not game to open her mouth no matter what she thinks.

Yep, it's been a funny old journey to the music forum but boy has it been a fun ride!
Posted by Ganeida at 12:55 AM

Oh girl I do love that picture! This post captures what I think is one of the most wonderful things about motherhood... you get to know your child so well, that it's almost like you are part of the same brain, same spirit- or something. I'm not articulating it well, but I suspect you know what I mean. You respond to your child on such a deeply intuitive level.. it goes beyond any other form of communication. I never really understood about unconditional love until I became a mother.

I love that picture of you and Ditz. So sweet!

This is so exciting for Ditz and encouraging for me. My Princess has what her piano teacher calls a "clear" voice, has I always did. I would think that is flute like...maybe? My Princess is always trying to force vibrato that just is not there.

I used to sing in a Christian band, my aunt's actually, in my teens and I did the soft high harmony. I had some speech difficulties, plus I was in braces back then. I love harmonizing and could even hold my own against anyone going off or singing a different part, even different words, but my voice is not that strong, probably due to having no training. In choirs, I was always put next to the stronger singers that would get off key.

Hopefully, my Princess inherited a bit from her father's mother and my aunt, both very strong and beautiful singers.

We were at a music group class/workshop given by a trained singer and she told me that formal training should not be done until the child is at least 12 years old. Oh, and my husband's niece began singing opera at 14 years of age and was in a few musical productions.

Sorry so long, but singing is a passion of mine (as if you could not tell) and I am hoping my Princess is as talented at it as I think she might be.

how lucky she is that you are her mother. she got the mum she needed and you got, well, Ditz! i think she is an interesting kid. too bad she is so far away.

Sandra: Ditz is an interesting kid; not always easy but invariably interesting.

Linda: no~one in their right mind would have paid for music lessons for me but I love music & have enjoyed Ditz's lessons. Interestingly it has changed the way I hear music ~ not how I listen but how I hear it.

Persuaded: I think I have got better at this mothering thing as I've gone along because I do tend to become *unavailable* one way or another, going off into my own little world. I do try not to do it so much now & Ditz hates it, which tends to stop it dead.