Shop till you drop.

“When women are depressed, they eat or go shopping. Men invade another country. It's a whole different way of thinking.” Elayne Boosler

Yesterday we got on a boat, not as early as we wanted, & went to Australia ~ which is what islanders say when they want to be funny & sarcastic & let you know how much they hate the mainland. Yeah, well, we've been here a long time & if shopping was something I actually enjoyed I'd live closer to the shops now, wouldn't I?

I do not like shopping. I particularly hate shopping for food but the natives insist on being fed so you know, it's something I do ~ every week. Shopping for clothing doesn't rate much better no matter who I am shopping with. This is not a bonding activity in our house. Rather it makes for murderous intent. Liddy will shop till she drops, try on everything in the store then decide she likes nothing. Painful. Ditz likes nothing, won't try on anything & would rather go naked than be forced to buy new clothing. It may happen yet! As for me, there is so little in the shops I actually like that I prefer to ignore the whole question of attire & sloth around in baggy daggies [tracksuit sweats] & multiple layers of jumpers ~ our jumpers, not yours. Ditz however is parting company in the middle again, mostly because the child is in denial about being built like Marilyn Monroe rather than Twiggy, which is unfair of the universe when mummy & Liddy got built like Twiggy.

Consequentially Ditz has been buying size 14 T~s when really she needed a size 16 just to accommodate her chest. This time she actually chose 2 nice things: a bone & black plaid dress shirt ~ very nice but it had to be size 16 despite her protests or it just wouldn't fit you know where! ~ & a blue & bone plaid dress with a drop waist ~ also size 16 because size 14 just wouldn't stretch across her hips ~ not if she wanted it to do up!

When Ditz is looking for an excuse not to buy something she looks at the price tags & then declares that it is too much money so she's no longer allowed to look at price tags. I will tell her if I think something is too much money [which it always is if I don't approve of it! ☺], otherwise she has to decide if she likes it. As what she liked was both acceptable & on sale we did particularly well.

End of season sales are now on so we were all looking, not just Ditz. I like plain things in unusual colours so I expected to go home empty handed, as per usual. I just can't stand fuss in clothing & it must be comfortable above all other considerations & if it touches my skin a natural fibre, preferably cotton. Against all odds I came away with one of those funny shirts that has white collar & cuffs & coloured body, turquoise in this instance, & the last on the rack, which just happened to be in my size & on sale. Hm. I dithered though. Went for a walk. Thought about it. Looked again. Seriously, I don't have much call for good clothing. I 'm helping build a house & do lots of yard work & I ruin clothing faster than you can shake a lamb's tail at but I did buy it ~ along with a moss green jacket. My mum has one I admired while we were up there. Different style & slightly different colour but very similar & I'm a jacket girl. I like being able to zip to just the right place for maximum warmth or coolness, deep pockets to stuff things in yadda, yadda.

Liddy bought a couple of jumpers. That child has more clothing than she knows what to do with & Ditz can no longer fit into it so can't borrow. Sad, sad, sad.

Then I hit the linen sales at Pillow Talk chasing their single doonas. My older blankets & things seem to have been borrowed by the boys for camping trips & not necessarily come home again so I needed some extra things but perhaps the bargain of the day was Ditz's.

Ditz has wanted one of these big canvas bags for ages. For choir. To hold her music things. So she can be trendy & not look such a dork with her sister's borrowed knapsack. I priced the things & nearly had a meltdown but was sort of promising one for her birthday ~maybe. If the price was reasonable. Sale on. 20% off the sale price. More than reasonable so I bought her one. A choice of camouflage or grey. I am so over the whole camouflage look! Who wants the whole world looking like dad's army? So we opted for grey. Ditz is delighted. 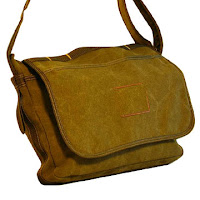 This is the sort of stuff we don't have time to do in term time. It just takes too much time & wears everyone out. There's a reason I live on coffee.

She may be growing up... do ya think?

Next best thing to going shopping yourself is reading about others doing it. :]

We have the worst time clothing shopping for Cindy these days - she's starting to develop that 'shape', yet she isn't very tall...things that are the right length are 'cut' more for an 8 year old stick, y'know what I mean? Argh!

I agree with you shopping is the worst! I don't mind food shopping so much as long as I don't have my children with me asking for every sugary/unhealthy food they see. I'm so glad that this shopping trip was a success though! I'm also thankful that at this age my children are still of a mind that they don't care what they are wearing as long as it's seasonally appropriate.

I would have gone for the Camo. I dream of wearing army gear cos its full of pockets.

I am so thankful that the Princess and I find nearly all her clothes at seasonal consignment sales. A few hours of madness each spring and autumn, and we are pretty much done except for underwear, socks, and shoes.

seeking: Ditz is growing so fast at present that's not even an option. About every 6~8 weeks at present we need to rebuy so I'm not buying a lot of anything. It's driving both of us nuts as we don't like shopping. *sigh* She should stop growing taller shortly ~ I hope ~ but then she wears a size 9 shoe already & still has a few inches before she catches up with Liddy who also wears a size 9 shoe! Joss, however wears a size 13/14 & I am just so pleased I no longer have to buy his shoes! That's the army's problem.