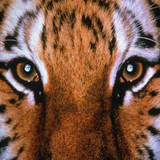 “Tiger! Tiger! burning bright / In the forests of the night, / What immortal hand or eye / Could frame thy fearful symmetry?”William Blake.

Liddy, who enjoys debating, has a dreadful habit of starting arguments & then using me as her prime resource! This is frustrating when I am in the middle of dinner preparations & unsure of what argument will best suit her needs ~ or worse, as I enter my dotage, I see scraps of useful information sliding into that black hole I used to call my mind.

Sadly Liddy had a much better grasp of how to debate than the young man she was busily trying to nail. Every time he looked like he was on shaky ground he changed the subject. Aggravating. My suggestion on how to deal with this [either block his access to her computer, just not enter into the baiting, or become repeative & insist he address the argument] were not well recieved. UGH. I think they needed to start with some simple ground rules as to what constitutes evidence because the historical data I was providing was rejected but then you can not convince an aethiest who doesn't want to be convinced no matter how good your evidence so I did think she was engaged in an extremely pointless exercise. Needless to say she wasn't in a very good frame of mind when she finally got round to ringing her brother to ensure we had a car for Friday's excursion.

Theo, who had not got around to fixing the bearings yet, got an earful. Liddy was absolutely ropeable as she has been asking for the car to be fixed for more than 2 weeks & had her money all organised. She is far more efficient than either of her brothers & she was not impressed. As it is Ditz's & my only free weekend for ages Liddy got on~line & worked out buses & trains ~ one way! She never thinks to check the return journey unless I remind her! It looked doable & no more time consuming than taking the car; just not quite so convienient.

It meant a really early start but unusually I slept in. Not so unusually so did Liddy. Super unusually Ditz was the first one up but it never occured to Ditz no~one else was awake so she left us all sleeping peacefully. Consequentially we all rushed round frantically like headless chooks, barely made our boat & were starving because only Liddy had thought about breakfast! Which is typical.

The run down the coast was pretty smooth despite about 4 changes & not having a clue where any of the stops or connections were & it turned into an absolutely glorious day along the way. We arrived before opening with a concession voucher friends had kindly given Liddy which was wonderful as Dreamworld tickets are not cheap & frankly super expensive for me because my inner ear is hopeless & I get sick at the drop of a hat. Ask Ditz. She took great pleasure in putting the two of us in a Wiggles teacup, meant for tiny littlies, & watching me go green & peculiar looking! I can do some of the up & down rides but nothing that spins as well.

Liddy knows me but Ditz, who has never been to an amusement park before, had worked herself up into a real tizz on the way down & was both so excited & so nervouse I think Liddy was rather sorry she'd suggested this particular outing but nevertheless she herded us towards the first ride of the day ~ a massive tire affair that shot the rapids through dark tunnels, a nice gentle beginning to what looked like being an adrenilin fueled day. I would not have started with a water ride but in fact I stayed lovely & dry; both girls got soaked!

I don't know what half the rides are called & it doesn't matter because I stayed on the ground minding the bag for most of them while Liddy & Ditz spun crazily through the air & argued about whether or not they would do the Tower of Terror & the Giant Drop at the end. The Drop is 59 stories & no way was I even remotely considering that! Liddy has done it before but was so terrified she wasn't real keen to do it again. Ditz didn't want to go on her own. By the time they were ready it had been shut down & I breathed a sigh of relief.

Liddy is a very considerate hostess & had taken into consideration my well known woosiness for amusement park rides so we detoured through Tiger Island to see their famed white tigers, watch the display & go ooh & aah over their sleek gorgeousness. To see these beautiful animals ♥♥smooching♥♥ up to their handlers just like Issi does to me was very sweet. A cat is a cat is a cat, no matter their size! The cats are obviously well loved & handled & showed obvious affection for their handlers. I would have been perfectly happy leaning over the fence all day & watching the cats loll in the shade but the troops were making impatient noises so we found an *all you can eat for the price* place & let Liddy refuel.

We then wandered through the wildlife sancturary which has plenty of the wildlife every tourist wants to see: emus & koalas & kangaroos; an avairy with a cassowary [I've never seen one before as they are a northern rainforest bird & huge with a doorknocker on their scalp!]; a night walk with owls & sugar gliders [which are just too cute for words!] & a pond with crocodiles. Don't like big crocs .... any crocs really, so we didn't stop.

The girls then headed for the Tower of Terror but as I said it was no longer running & we ended up at the dodgems. Even I was prepared to ride a dodgem & was happily chootling round the perimeter unbumped & not bumping anybody else when my lovely girls decided to gang up on me & I was attacked from both directions at once! Liddy was looking pretty worn by then so we decided to call it quits & head for home.

The return buses were not nearly so accomodating so we opted for the safest course & trained as far north as Southbank before getting a bus back the other way. Unfortunately I listened to Liddy, who has more experience with the town buses than I do, & we got a bus that meant a change because, Liddy assured us, it would only take 40 minutes to the jetty as oppossed to an hour or more. Unfortunately we chose the wrong bus & did the scenic detour! A ten minute trip turned into half an hour with panoramic views of the University Campus. I don't travel real well in crowded spaces up the back so was rather green when we spilled out at the busway change & started looking frantically for the busway we needed. It was getting dark & cold & we were all exhausted & Liddy was furious with herself but all's well that ends well & we reached the jetty at last & were back on the island in time to grab milk on the way home before the shop closed & a very happy puss~cat greeted us with unfeigned delight! When there's bags involved he frets that someone isn't coming back that night. Silly puss!

I am a convert to theme parks, I love them, all the scary rides, but not the old rattling ones as they shake the dodgy brain up too much for my liking. Once it has had a good whack I reckon on not worrying it too much again :o)

Glad it went well. I hope it stood up to Ditz's expectations

Hi Ganeida,
It sounds as if you all had a wonderful day. Well, that is, apart from the bus trip. :P

I would love to take our children to Dreamworld, but it would mean a VERY long drive, so will have to wait for a while.
Blessings,
Jillian
<><

That sounds like a wonderful day! I love rides!

Lovely day! The combination of rides and zoo all sounds similar to Busch Gardens in Tampa, Florida, where I used to love going. I enjoy amusement parks, but had I been invited to share the day, I would have stayed with you watching the tigers with sketch pad and camera for hours. You know how much I am looking forward to being with the big cats in a perfect future, should the Lord grant me that one wish.