Fishing is boring, unless you catch an actual fish, and then it is disgusting. ~Dave Barry 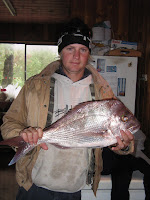 Theo went fishing & caught this. It is a schnapper, what has to be one of the ugliest fish ever. Seriously ugly. The sort of face only a mother could love & in this case, probably not even then. He informed us proudly it was 6ocm long but thankfully he took it away & cooked it somewhere where they appreciate eating things that look like this. I just don't appreciate things like this, full stop. Not ever.

With things like that living in the ocean I'm surprised anyone ever goes swimming in it from choice. Maybe they just don't know. I mean this thing has teeth to make a shark proud. So it is a worry given 71% of the earth is covered in water, most of it salty & deep enough to harbour all sorts of strange things.

And it gets worse. The longest mountain range is under water. The Mid~Ocean Ridge circles the globe from the Arctic to the Atlantic, then into the Indian before crossing into the Pacific. That's longer than the Andes, Himalayas & Rockies combined!

Mauna Kea in Hawaii, if you measure it from the ocean floor instead of what actually sticks out of the water, is taller than Mt Everest but the Challenger Deep in the Marinas Trench of Guam is the deepest spot on earth going down, down, down for 35, 802 feet!

I seriously do not like the ocean. Some of what lives there is downright spooky. On the other hand it has given me one of the best analogies I've ever found for the Peace of God. Places like the Challenger Deep are so far below the surface that no light shines there but in that absolute dark no wave breaks. The waters are perfectly still. No matter what storms are breaking overhead, no matter the surface froth & turmoil, the tranquil deeps remain undisturbed.

I'm good at the surface froth & bubble but at my core the centre remains undisturbed. The peace that passes all understanding.
Posted by Ganeida at 2:04 PM

But I WANT to know....what did it TASTE like? Is schnapper and snapper the same thing? I have to admit - the water (ocean) scares me too. And I am scared of only two kinds of "animals". Snakes and fish. They both REALLY freak me out. Even goldfish - I can't handle them.

well.. it is a nice lovely shade of.. well it's sort of a pink-y color now isn't it. amelia says it is gross, and i'm not allowed to call it pink, because she likes pink and this fish is gross, dead and unpleasant with dead fish eyes (seriously the girl is over my shoulder dictating to me... i am just the scribe;))

personally, i love the ocean.. but i have never been out on it when it is at all un-calm, so i suppose i don't fully know it well enough to say i love it.

amelia is walking around saying "dead fish eyes"... honestly, sometimes i do worry about that child;)

It *does* look pink!

You know how much I adore the ocean *grin* ...though the only thing I eat from it is the seaweed LOL ...which reminds me, I have to snag some dulse to bring back with us...

(love of the ocean yes - but I'd have to say that even *I* would not want to go 35 thousand feet DOWN. yikes!)

If I was mathamatically inclined I'd mention the pressure which is enough to squash bed bugs flat but what gets me is there enough glitter floating about in the ocean that if you could actually harvest the stuff every man, woman & child on the planted could have 9 pounds of pure gold. So why isn't someone doing that? huh? huh?

Now you've got me all curious as to how far down humans *have* been able to go LOL ... all that glittery stuff in the ocean eh? I need to find myself a sieve. :-P

Lots of trivia I did not know. I live in a state with many, many lakes and I don't use them at all. I am not found of the water, except to look at it.

Such funny ideas coming from one who lives on an island.

I lived near water much of my life. I miss it now that I don't. Water is so wonderfully reflective and moody, and such interesting things come up from the unknown.

Moly: I will try & give you a link with a fascinating running commentary about the U.S. navy's *Trieste*, some sort of submersible thingy that took 2 men down to the bottom of the Marinas Trench ~ just the once & never again. Now that is seriously spooky! The trieste was designed for 36, ooo feet & they took it down to 35, 800. Dying a little here just thinking about it. www.metafilter.com/51912/How-low-can-you-go

That is an ugly thing but I bet I would like it. I could live on sea food!