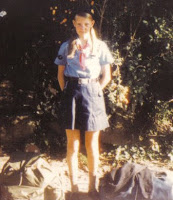 I rather dislike the way patrol leaders and seconders are chosen by the children, it becomes a popularity contest and the funniest person doesn't make the best PL or APL. I think locally we will loose some kids over this which is a shame as our local troup (mine are in Scouting) is fab. Loads of camping and mucky out door stuff.

I hated Brownies and Guides. Lots of nasty spiteful girls in one room, ghastly, should have asked to join cubs but I doubt that would have been allowed back in the day :o)

lol. I'd forgotten yours are still involved in scouting. I do think so much depends on the leader. The leader makes or breaks a company or troop.

Oh boy, do I ever know what you're talking about - Cindy was in Guides for two seasons, and man, what a drastic difference from what I remembered. (I was in Brownies all the way through and Guides for two years)... *Everything* has changed with the program, even more so now - in fact, some more new changes were coming in while Cindy was in it. It's all fluffy and pink and cyberchick now. Pah, even the cookies are different LOL

Nah, but moreso, the depth of the program is.. gone. Or it was with this group anyway.. I dunno, we might check and see if the have the Pathfinders program here in the Fall (for 12 and up)..maybe it won't have been as badly wrecked..

I was never in Brownies or Girl Scouts. My brothers were in Boy Scouts and my mom had her fill of sewing patches on their stuff. She didn't want to sew anymore! :)
We have those same spiteful and nasty girls in gymnastics. (THey are truly a bunch of snots.) WHat is it about girls nowadays?

Moly & Britwife: the snotty element upsets me so much. Those with it didn't last long in the movement as I knew it. It wasn't geared towards pink & fluffy & selfishness but towards skill development, challenge, service ~ an area where girls could compete in traditional male areas without fear of ridicule, at their own pace, in their own way. I did badges like Botswain because we lived on the water & kept boats but I had to learn new skills to complete the badge. I learnt to change a fuse & a tire & for a child not geared towards practicality & resisted all efforts on the home front that was probably important. When it is done well it is an excellent program. I know other companies, including the one I was suppossed to join, were not as blessed with their leaders. Ours wanted to gain their certification for camping so we practised a LOT!!! ;)

I don't know much about your Girl Guides, but I agree with you about relevance. In America the Girl Scouts are (on a national level anyway) very big in the lesbian movement so we try to avoid them all together.