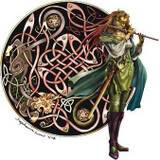 THE earliest inhabitants of Britain are supposed to have been a branch of that great family known in history by the designation of Celts.Thomas Bulfinch
Random Internet browsing turned this up & I must say I howled with laughter given how much some people insist pants are men's clothing & men's clothing only.
When the Romans first invaded Britain they had their first encounter with braccae ~ the word from which we derive the term breeches ~ an item of clothing primarily worn by Celtic men, though not unknown to women. They were typically trousers that reached to the knee, or in the colder north, to the ankle with a drawstring at the waist. The Romans were not impressed & thought the Celtic men terribly effeminate because, as we all know, real men wear togas!
Posted by Ganeida at 5:34 AM

I love your trivia! (But I am always freaked out by waking up early on Monday morning and seeing the title "Tuesday's Trivia" in your title. I frantically look around for a calendar to see if I missed a day!)

hee hee hee.... you probably also knew that the women of china always have worn pants as well☺


wait... wait a minute! it's monday!! why do you have tuesday trivia??

People, people, I need to put up that button on my sidebar that says, Don't worry about the world ending; it's already tomorrow in Australia! We're a day ahead of you. My blog dates confuse me too but if I watched them Ditz would constantly wrangle a 3 day weekend.

People were trying to put me in a dress. I would have none of it!