Yes, We did do Mother's Day. 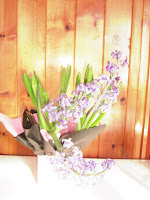 A Freudian slip is when you say one thing but mean your mother. ~Author Unknown
We don't fuss overly much about Mother's Day; commercialism issues & I often get special treats from my kiddiewinks on odd days throughout the year so I don't feel I lack being loved.

However... the girls do like to make a little bit of a fuss. After years of Liddy hissing in horror, " How can you watch that stuff?" I have finally managed to corrupt the child irredeemably & she has been steadily adding to my Johnathan Creek DVDs so she can watch all the episodes that so used to give her the heebie~jeebies when she was younger. I'm not sure what about them made her skin crawl. The music perhaps? Certainly the latter episodes grew darker but most of those I never saw as it was Caroline Quentine who first drew me into this series. Such a funny, funny woman but I digress.

I grew up when Agatha Christie was still all the rage if you were into crime fiction at all ~ & I was. I never could stand Agatha Christie because all her characters were cardboard cutouts so not interesting enough to care about who did what to whom. However I ran into Dorothy L. Sayers along the way & initially I felt really, really clever, as you always do, when I found I was able to work out the murderer in her books. Then I read her take on writing crime & she states unequivocally that the most interesting aspect of crime fiction is not who but how! I have been hooked ever since & the thing that has always intrigued me about Jonathan Creek is that it is very much about the how. Each episode presents an *unsolvable* case & it is pure bliss to see how sleight of hand, & tricks of illusion can be used so innovatively.

BBC t.v has spoilt my taste for poor American copies with such things like the Mentalist. As she's grown older Liddy has appreciated the wit & cleverness of things like Jonathan Creek more & more. Ditz, weaned to images from Meet the Ancestors has a fairly hardy constitution when it comes to these things & has always had a fairly mature sense of humour. Both girls know how to make an occasion out of something fairly simple so once I had picked up my new DVD Liddy supplied chocolate, Ditz made coffee & we proceeded to eke Jonathan out, one episode at a time, to make him last as long as possible. He is finished now, unfortunately. I occasionally watch the Mentalist but it is not the same. Patrick Jane is no Jonathan Creek. *sigh*

So I wasn't expecting anything Sunday morning & Liddy works anyway so between running round making sure she was organised & organising for church my morning was fairly well occupied. So I was surprised when Ditz finally surfaced & presented me with a pot of Hyacinths in bloom. The poor things were looking a tad bedraggled. Not only had she never thought to water them, in her effort to keep them secret until the big day they had spent several days locked in her sunless cupboard. Maybe we need to do some basic botany?

There is also, so to speak, a sort of joke on the side, one only someone raised on BBC humour could appreciate. Hyacinth is the name of the main character in Keeping Up Appearances, another show guaranteed to have me rolling in the aisles as I cringe about this woman's inherent snobbishness. However I have decided it is time to teach my children the meaning of true subtlety & plan on collecting at least one series of Penelope Keith in To the Manor Born. They don't make comedies like this any more. Pity.

I am a mystery fan. I like murder mysteries and I am probably not as particular as you. I actually liked Agatha Christie, although I won't argue your assessment of her characters. I like Dorothy Sayers and also P.D. James. Along with many others.

I like Chesterton ~ though he cheats. lol. And Patricia Cornwell ~ though she got too graphic for me in the end. Yes to P.D James. Actually I'm not fussy so long as the author doesn't do the cardboard/jig~saw thing. I like to care about the people being killed. lol

Not to do with your post, but did you see this link on Inashoe? Got to read it! http://takeyourvitaminz.blogspot.com/2009/05/dog-diary-vs-cat-diary.html

Ah, wistful sigh, remembering watching To The Manor Born,... went to the house once, it is a posh hotel or spa or somesuch and the cottage is still there in the grounds which have been turned into some ghastly flop of a kids entertainment place

I love your flowers! Wonderful Ditz! :)
Now we have another thing in common - the BBC comedies. I love Hyacinth too...
I don't know why, but I assumed that Oz celebrated Mother's Day in March, like they do in England. Happy Belated Mother's Day!