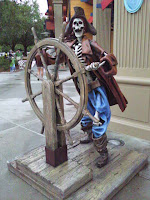 Where there is a sea there are pirates.

I knew about Grace O'Malley, who was an Irish thorn in Good Queen Bess' pride. Jeanne de Clisson [13oo ~ 1359] is rather more interesting though not quite as much fun.

She was first married off at 12 & must have been a pretty hardy lady because she survived childbirth twice & outlived her husband. By 16 she was married to her 2nd husband & produced another 5 children. In that time & place that alone was something of a miracle.

The politics are a bit complicated but when Philip VI beheaded her beloved Oliver she got a tad upset, sold of the family jewels & property & invested the proceeds in 3 warships. The warships she painted black with red sails & with these she marauded the English channel after any French ships she could get her hands on. If caught by Jeanne your chances of survival were zilch. She was neither a kind nor forgiving lady, personally executing any aristocrat foolish enough to be aboard his own vessel. However she did always spare 2 or 3 crew ensuring that Philip heard that the Lioness of Brittany had struck again.

That's someone I would not want to cross paths with that's for sure!
Connie

Uh I thought your head was filled with the Celts or whoever they are. Now you're thinkin' 'bout the Irish. Goodness, lady I cant keep up!

what a sad story that is.. i mean when you really think of the reality of it. a 12 year old child married off and bearing 2 children before she was 16. then all of the stuff that followed. she must have been a damaged and hurting woman.

this is why i love history- i love "getting to know" the figures as people and thinking about what their lives must have been really like. thanks for sharing about this particular lady;)

I'm friends with a couple who is very into pirates. I am making the wife an apron w/ a pirate print as a housewarming gift...and now I have a bit of trivia to go with it!

MrsD: The Irish are Celts! :D On the other hand Jeanne was French, though a Breton, who were, & to some extent still are, Celts. They have an ongoing row with the French government over the Breton language, which France has been trying to extinguish for years. They are funny about the *purity* of their language & are slowly killing both French & Breton in consequence.

Diane: Yep. What I like about history too. The child should still have been playing with her dollies. She seems to have been very in love with her 2nd husband. His death certainly sent her off the rails.

Allison: Then you would enjoy the tale of Grace O'Malley, who I believe even met secretly with QEI. Irish politics are even more complicated than most but Grace was a character in her own right & a quite remarkable woman.

May I respectfully point out that the dates are a tad confusing. If they are birth to death then she died at thirteen. Perhaps you mean't 1243 which would make her 113. Good innings for those days.

Maths so not my thing, Kimba. I didn't sit there & add up how long she lived! lol. I'll double check from another site as I just copied what was on wiki. 113 seems a tad unlikely too.

Now I get to read the rest of it.

(All I know about pirates I learned from a Quaker.)

MamaO: thank you so much! :) I was just looking for dates as I knew the general story & didn't double check as I should have. I happen to know Kimba has a very mathamatical brain & would be bound to pick up such an obvious mistake! I'll now rectify the problem.

"All I know about pirates I learned from a Quaker."

Now THAT is funny!

"All I know about pirates I learned from a Quaker."

Bwahahahaha! This is one of the best lines I have read in awhile! This is why I find her fascinating, or at least one of the reasons.

Cool, I love it when I try to be clever and it works. :-D

Upstaged on me own blog! :P