I believe in everything until it's disproved. So I believe in fairies, the myths, dragons. It all exists, even if it's in your mind. Who's to say that dreams and nightmares aren't as real as the here and now? ~John Lennon

I own something I believe is considered a classic, something so old & battered & loved I can't believe anyone but me would want it: a tattered [very] copy of Peg Maltby's Peg's Fairy Book. 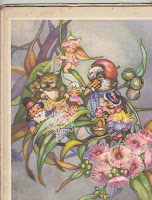 I do not know where my copy came from. My mother more than likely & given it's age it may even be a survivor of her own childhood. It certainly looks like it has done the rounds of several generations. The pages are loose & torn. One of the loveliest illustrations is 1/2 missing & all the pages show signs of being chewed on by horrible little silverfish. Just the same I hang on to this book & hang on to this book, not for the stories which are twee & rather too sickly sweet for my taste but for the illustrations. The illustrations are wonderful!

While other little Australians were cutting their teeth on Snugglepot & Cuddlepie, which I have never actually read, ever, I was lugging round this monstrosity. It is about A4 size with a thick, heavy cardboard cover [probably the reason it has survived so well] & nice thick pages. 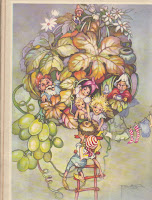 Each colour illustration is full page size with a wealth of detail & some telling peculiarities that intrigue me. Many of her fairies have a dark Gypsish look about them with their hair caught up in a headscarf, gold hooped ear~rings & full peasant blouses with long fancy skirts. They are domestic with washing strung up to dry & meals to be prepared. There is also a mish~mash of cultures to be found. Amongst the grape arbour pixi home are children with gum~nut blossom hair & other illustrations have Australian native animals or birds but Peg herself was not Australian born.

Peg was born Agnes Newbury Orchard on January 17th 1899 at Ashby-de-la-Zouche, in England. Her family, as families do, never used her given name. Peg she was called & Peg she remained all her life. She migrated to Australia in 1924 with her husband George Maltby & they became natives of Victoria, which is understandable. The English struggle in our northern climes with the heat, the humidity, the wet, the flies & the leeches. Some of those things at least don't usually bother the southern states.
She had 4 children & supplemented the family income through the depression years with her artwork. Her fairy book was her first book, published in 1944, though I don't think my copy is a first printing. Peg died in 1984 but her illustrations are still used for decoupage work & if you ever get a chance to own a copy of her work, grab it! You won't be disappointed. There is such a wealth of detail in each picture you can look forever & always find something new.

Old books are such a treasure. The illustrations appear to be so lovely! Thanks for sharing them with us. It makes me want to take a trip out and forget myself for a few hours in some used book and antique shops. :)

Oh yes, I'd like a copy! I am a dreadful children's book addict, in case you don't know by now...no excuse.

As always sweet lady, thank you for your kind words!

The illustrations are beautiful. Old books are such a comfort! I still have all mine from childhood, a GRIMM'S Fairy Tales in German is one of my favorites!

Have a lovely day where you are! It's going to be another hot and sticky one here in Texas!
Connie

Wow. That's beautiful! I would have loved that when I was a girl.