In which Ditz Stares down her audience.... 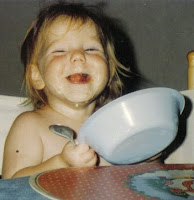 "I like to feel the burn of the audience's eyes when I'm whispering all my darkest secrets into the microphone." Conor Oberst.

We were carpooling yesterday & then I went to help pack up an apartment while Ditz & her ensemble rehearsed. We trotted back into town about 6ish for hamburgers before wandering over to QPAC to pick up our various children.

They were not on time. We attracted a lot of attention wandering round the empty foyer ~ every one else being inside in the theatre ~ but eventually were able to ask someone if the choir had sung yet. Oh no, we were assured, there was no choir singing tonight.

People poured into the foyer for interval while we hunted up staff to ask if we could watch the monitors for the kids performance. Shock! Horror! Gasp! There was no choir tonight! Are we sure we didn't want Joseph & his techni~coloured coat? Quite sure. They weren't real happy but we were allowed to watch the monitors & lo & behold the kids filed out on stage promptly after interval, a long nervous row of them looking like black & white blobs on the screen but they sang beautifully. One little section sounded a bit shonky to me & Ditz just said disgustedly that they were all singing at a different tempo because people weren't watching the monitors but as they got it together pretty quickly its probably only people like me, who register nothing except it doesn't sound quite like it usually does, who even noticed.

The kids were practically sitting in the audience's laps & Ditz, who does quite a good Death Stare as a regular thing, was busily out staring her audience one by one. Anyone who looked at her for longer than 2 seconds was eyeballed until they shifted their gaze. I don't think that's quite what is meant by connecting with your audience! However everyone was as surprised as they were meant to be by the ensemble performing; special birthday performance for the composer Ian McKinley , whose version of the 23rd Psalm the kids were singing. I think only the backstage crew knew about it. lol.

The kids wandered out closer to 9 than 8.30 which meant no way were we getting the 10pm boat ~ which meant we didn't wander in our own door until almost mid~night. Ditz, who was very wired when she came off stage, was silent by then, so very, very, tired & I'd cat~napped on the boat home. No rehearsal this week but after the month we've had I think we can all do with the break. We might actually get some of the other school work done!
Posted by Ganeida at 1:19 PM

Awwww. Ditz is so cute in this pic!!!

*NEVER* would I believe that sweet face capable of a "death stare." Aww.

I just cant imagine needing to catch a ferry everywhere. How weird and different that would be. That is an adorable pic!

Hi Ganeida,
Wow - what a night! I could just imagine the look on your face when they said that the choir wasn't there. lol
Blessings,
Jillian
<><

Hi Ganeida,
I have an award for you waiting on my blog. =D
Blessings,
Jillian
<><

Seeking: only by the grace of God...

MrsC: I love this pic too! ☺ Those weret he days!

MrsD: I can't imagine NOT having to work around a boat. lol.

Jillian: Oh, WE knew they were there...but the look on the staff's faces when they realised we knew something they hadn't was priceless! ☺ Thank you for the award. I meant to pick it up but I fell asleep instead & missed dinner. I know someone cooked for the rest by my kitchen but they didn't clean up. ☺

I would've been a nervous-wreck with all the "no choir" comments. (As in - "WHAT? Have you LOST MY CHILD?!!?")
I'm glad that it all went swimmingly, and that you have a nice break this week!

I just cant imagine needing to catch a ferry everywhere. How weird and different that would be. ...(MrsD)

I can't imagine NOT having to work around a boat.

... and I miss having to always consider a boat! *grin*

Death stare ~ love it. LOVE it.

You've got your Spring on its way and we've got Autumn trying to shove its head in a bit early ~ my nose was actually cold the other day. Mornings are getting chilly - I can't believe it's gonna be September next week! Wow. Where'd the summer go???