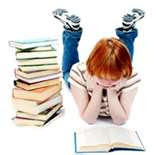 Hi Ganeida,
Thank you so much for sharing your homeschooling day. It sounds as if you have your work cut out just making learning fun for Ditz. :P

Congratulations on teaching Ditz how to learn, and how to find out things that she needs to know. I'm still struggling through that one with both of our children at the moment, although number one son is starting to get it. ☺
Blessings,
Jillian
<><

If that book is the one I am thinking of the ending infuriated me, I shall await your opinion

I love reading the nuts and bolts of other families' homeschooling experience. Having a houseful of children all of whom have radically different interests and learning styles is my biggest challenge (I was going to say frustration, but really it's not a negative thing) Noah is my biggest teaching 'challenge' so far- even moreso than his sisters who have Down syndrome and Asperger's. Like Ditz, he has little to no interest in the subjects that don't interest him... but since reading is the main one of those, I am not able to just sit by and let it slide, lol. He is coming to realize that the ability to read competently opens a lot of learning doors that are very interesting to him... so we're (thankfully) making progress on that front. whew!

After teaching my own kids, it's a wonder to me that public school, one-size-fits-all education works at all.

Ah, poor Ditz, having to learn a bit of everything when she has so much talent in one area! I can see where it would drive her batty.

lol Jillian: While I pander Ditz terribly in a good many areas I learnt a neat trick with my oldest. Use the opportunities when they are really keen on something to suddenly become incompetant yourself! It forces them to stretch & consequentially most of mine have excellent research skills. Sometimes I wish they weren't quite so good.

Hojos: The Diddakoi isn't typically Rumor Godden but I didn't choose it for its ending! ☺ I remember reading the Greengage Summer at far too young an age & being completely horrified by that ending. Most of the *facts* about gypsies seem to be fairly accurate though I have picked up one inaccuracy ~ though along with much else ideas of ritual cleanliness may have changed or been lost.

Diane: Reading is the big one isn't it? Ditz reads very well but unless her world is fairly calm finds it impossible to settle quietly with a book. NOT her first choice of activity. ☺ Good point about schools. It is a wonder, isn't it? Ditz is fantasy reader & has got a really good series at present which we are both enjoying & it is using more adult vocab so I'm particularly pleased.

MrsC: Unfortunately Ditz then makes it her life's work to drive the rest of us batty! lol

I think my own child is becoming more and more like yours every day, at least in some ways. I am modifying lessons to be less "academic" or at least trying to mask it better.

Does Ditz do music lessons year-round? Or do you take a summer or winter break?

Homeschooling is a hard, hard job! You are to be commended for sticking with it... :)

Thanks for sharing your homeschool details. I love hearing what others do and use for schooling. We are still on break, but with all the planning and ordering, we don't seem to be?!?! Or, perhaps that's just me! We are pretty eclectic too.

Seeking: As a right brained learner myself I actually get Ditz's point; I just don't know how to fix it because we live in a left brained world ~ mostly, I figure, because the lefties are organized! lol

Britwife: we sort of take a break over summer. It depends. Sometimes Ditz has concerts or rehearsals. Usually her instruments stop for at least a month.

Thanks Jan Lyn. Some days I really wonder about us but as soon as I remember what school is actually *really* like I just take another breath.

I loved reading about your day/week. It reminded me again of the flexibility of homeschool and the need it places upon me to find out what methods best suit my daughter. I only have one student - it would be sad if I taught her using somreone elses method...wouldn't it!

I have learnt you can't force feed a kid knowledge so I tend to try & work with Ditz's strengths as much as possible, minimise her weaknesses & not worry too much otherwise ..

(and you're doing a fantastic job)

(Sorry for the lack of comments lately!! I'm often still sneaking in to read, I just find my brain in sixty five diff places these days!)

(I always found the Gypsies intriguing when I was younger - okay, so I still do.)

Jeanne: I am still learning ~ & just when I think I've got it nailed Ditz changes on me. lol I just tell every PS teacher I run into they should be down on their knees thanking me for not giving them this child!!! lol

Moly, my love: I know you have a short summer & are busy making the most of it. I have learnt even more that I didn't know about gypsies ~ & Ditz has learnt more than she ever wanted to know. lol She goes for these romantic subjects [the last one was pirates] & I make her research properly & put her subject into its historical & cultural context. One day it might click that all the romanticised books & films she likes are based on factual reality & *then* she will understand why I consider history so important for her. Ah, well...