Home is the sailor...

Home is where you can say anything you please, because nobody pays any attention to you anyway. Joe Moore 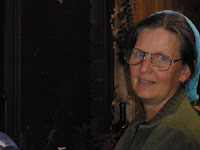 We are home. As in on the island. Two whole blissful weeks where the furtherest we've travelled is to another island. The weather has been lovely & warm during the day, coolish at night. It just feels so good to be doing the boring regular chores around the place: hanging out the washing, wiping down the kitchen, reading Ditz her history, grooming my poor moulting cat, eating breakfast on the verandah ~ well I was until I started painting. I have done the top deck only because everything else just got moved to the lower deck. When I have done the top deck we will move everything back around.


I enjoy a bit of hustle & bustle but the last month has just been insane & enough is enough. I now have lots of chores that have back piled & it has taken me some time to recover from a month of insanity. 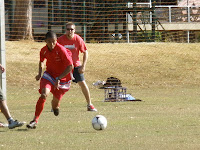 Saturday the girls & I played island soccer. This is always interesting because how many are on the pitch at any given time depends on who turns up & lots of the other rules get waived as well. The size of the blokes is one reason I stand waaay, waaay out on the wing & only move if the ball actually comes to me ~ which it very rarely does. Those who've played with me a while know I can boot the ball to some purpose & if I'm close enough I am nippy enough to steal a ball from the unwary but I have no stamina & no speed any more & I refuse point blank to run round a patch of grass after a little round ball in the sort of heat we had on Saturday.

I, at least, pay attention. Ditz was so busy spinning like a helicopter stray balls zipped right past her & she never noticed. [& she wonders why she got that nick~name!] When she pays attention she is a semi~useful back with enough weight & size to simply let strikers run into her ~& bounce off!

Why, I'm sure you're wondering, do we do this at all? P.E. I write it off as P.E ~ which Ditz is still suppossed to be doing but is rarely around for. I do it because thanks to Ditz I already do more sitting around waiting than is good for me. I, however, have learnt to take things gently, especially when I haven't played for a while. 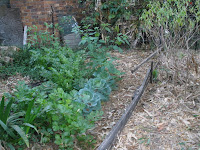 This is all that survived the unexpected winter rains in the garden: celery, which is beautiful & flavoursome, & cabbage ~ oh, & the basil. I have more basil than we know what to do with. We planted huge amounts of things but it pretty well drowned & rotted in the ground thanks to the tropical deluges that just shouldn't have happened at that time of the year ~ & the rain never let up until it was too late to replant. Oh, well, about time to plant for summer & that will probably burn to a crisp this year. However the grape, passionfruit, strawberries & nectarines should do really, really well before summer is finished. 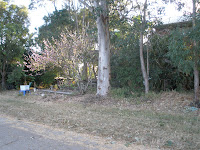 The nectarine is flowering profusely but just look at all the gum blossom along the sides of the road!!! The whole road was creamy with it at one point ~ & my driveway... & my clothesline area...& my verandah. I've never seen such a profusion of gum blossom spread like a thick berber carpet over everything! Can't say I'm real thrilled but is is pretty.

Just stopping by to say I enjoyed this post immensely.

btw that cabbaage is most definetly brocoli, i should no as I planted it

Hi Ganeida,
I love flowering gums, as they give the best of flowers and shade, too. ☺
Blessings,
Jillian
<><