On a lighter note: Sibling Wars: the Great Couch War.

The bone of contention &... 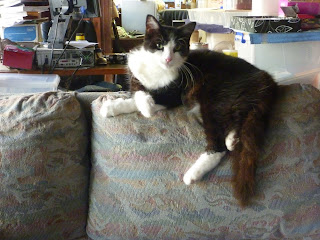 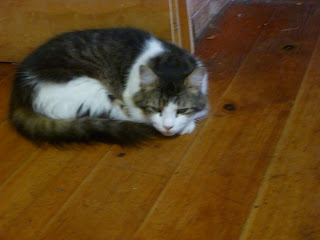 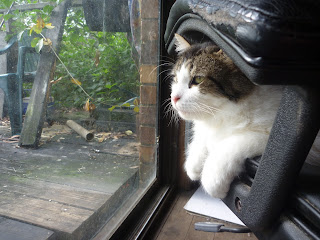 Opting for 2nd best.
When my mother moved house she had a couch going spare ~ & we snavelled it.  All our cats have adored this couch.﻿  No idea why.  The back is good for sleeping along ~ but so is our green couch.  It is usually bereft of humans ~ but so is the brown couch.  However this couch is unique for being the one that interrupts Dearest's line of vision to the t.v set as soon as a cat's body is draped along it's length.  Our cats know this. On the days Star & I are absent & the boys are feeling particularly insecure they bookend together at the critical point.  When we are home the cat who owns the couch is king of the castle.
The fight to own the couch has been prolonged & ongoing.  Marlow is a chunky cat & hefty in the beam end.  He has weight on his side.  Kirby is just plain smart.  At present, smart is winning.
The war to be top cat starts the moment Kirby comes in at night.  Round & round they go: around the walls, across the ceiling, over chairs & tables, cups & people.  The winner plonks himself bang between Dearest & the t.v set. The nearest human removes cat ~ & around they go again.  The winner plonks his butt between Dearest & his t.v!
I tell you, these cats have it worked out.  They both get plenty of attention mileage out of this one ~ & trust me it is all about attention.  When they don't wish to be disturbed they sleep at the other end, well out of visual interruption.  They'll even share.   Hmmm.  Having raised one set of males twins you would have thought I'd have more sense than to take on another twinned pair!
Posted by Ganeida at 3:14 PM

Very cute and I am a smidge jealous of your cats. We just had to put ours down suddenly last month. Hard. What I think is so riotous about cats is they really own the place. They own us, not the other way around. They think the dogs are dumb, and well, they are quite correct about that-at least our 2 dogs! Yes, cats are great to have about and my place is not the same. I like a long lane and cats about the yard. Makes it feel like home!

And the way to outsmart them is... get a higher TV stand. (Books are good, though I don't know how well they work with those new-fangled flat-screen thingies.)

Spare a thought for my Missy, will you? She has something amiss with her backend and naturally I didn't discover this until 10 minutes before the vet closed. They were going to wait for me to take her in, but she suddenly recovered the use of her legs at the sight of the carry cage (having allowed -- _allowed_! -- me to pick her up twice and feel around her nether regions) and moved with determination into one of her hidey holes. Given that she can move if necessary and is not showing signs of tick paralysis (my main fear) I have left her holed up, along with her food, water, a bed (in case she ever decides to emerge again) and a low-sided litter tray. She is a high-stress cat, so for anything not serious it is better for her to be at home tonight rather than in a cage at the vet's, waiting for examination tomorrow. It's unnerving to see her so out of sorts, though.

Jan Lyn: I like cats hogging the best chairs & the sunniest spot in the room. Makes it home for me. ☺ So sorry about your cats. That is rough. I still miss my Iss though Kirby would be mortified.

Siano: Oh dear. Prayers for Missy. I know she's high stress & that makes things tough. ♥ Keep us in the loop.

You know you are up to it! I believe my poor bruised brain is recovered, mostly.

Yay, Sandra! Have missed you, my friend. ♥

Ruby loves to sleep on the back of our couch, but sometimes when she isn't think, she slips off. Right now we are sharing the couch, however she is lying (very cosy) on my throw rug as it is so soft while me feet are getting cold:). I might have to do something about this.