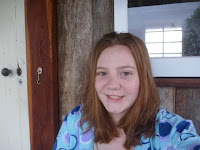 Early starts are so not Star's thing ~ but she will make exceptions.  Performances are an exception.

I did say I wasn't driving her in.  I had no intention of driving her in. Working day.  Lunch time Brissie. To even hope for parking is a joke.  Then another mum rang because she works & her daughter was desperate to attend the concert & her only hope was if I would take her along with Star.  I said we'd be training but then Liddy said if there were that many of us she'd do the driving.  I should have stuck with the original plan & gone with public transport.

We left in plenty of time.  In fact Liddy was complaining we could have gone one boat later, possibly two.  What was I thinking?  That was before the roadworks began.  It took us the best part of 2 hours to crawl into Brisbane & it was a stinking hot day.  Isn't that always the way?  Star & I, having created mayhem & chaos down Turbot street &  heart failure in the busway knew exactly what Liddy was not to do & gave her very clear directions up Elizabeth street & across Creek & down Ann ~ because Brisbane is a network of one way streets.  I swear, the place is a diabolical maze!  By then we were pretty short of time so I told Lid to pull into the first Garage knowing it was going to cost us a small fortune ~ which it did. *sigh*

All this to sing here: the Albert Street Uniting Church ~ one of our older church buildings ~ & not the prettiest one around either.  The red brick's a bit much but they have a pretty decent organ & a good crowd.  Super high ceiling with all the fans dangling up high where they were no help to anyone.  Forget air con.  The kids in their long B&Ws were suffering a bit.  Plus  a number of new kids there for the experience more than anything else so it sounded a bit thin on the ground in places.  I always say rehearsals are the best place to hear the kids.  They are comfortable, relaxed & generally happy to sing out. When they are a tiny group & right in the audience's faces it is another can of worms.  Some of what they sang:

Not the easiest repertoire but lovely to listen to.  So glad to get home though!  Island breeze & about 10 degrees cooler!  Liddy's still over there, lucky girl!
Posted by Ganeida at 1:44 AM

What do you do during rehearsals? Do you sit and watch or wander off and find somewhere quiet to sit?

I with you with crowded roads - they aren't my thing either. And nor is hot and sticky.

Jo: usually sit & watch/listen/read. I minored in drama at Uni so I actually find how different people put a performance together interesting. ☺

I could not imagine being in choir gear in this humidity! Bravo Star !
Waiting for a cool change to come through :-)

I think a lot of people in our area are wishing for hot and sticky weather right now. (not me) - we have a blizzard on the way with 50 mph winds and tons of snow. Off to the store to stock up before it's too late....stay cool Ganeida! Would love to hear the music. Blessings on you and yours.

For us it is off to rehearsal and piano recital this weekend. Fortunately parking (free parking) is usually not the problem for us, it is the distance and unpredictable traffic conditions--the hurry up and wait stuff. We leave rather early just to be sure and more often than not we have lots of time before the performance with a girl all dressed up, who would like to take advantage of the extra time to play in the lovely gardens and graveyard next to the performing arts building, a former old church.