"A hug is worth a thousand words. A friend is worth more." ~ Charles Caleb Cotton. 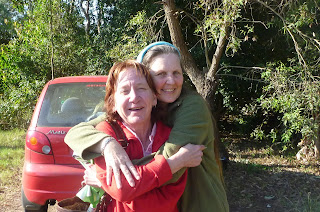 Remember Sile?  She's actually a true blue Aussie but she's married to an Irishman & only visits every other year to see her father.  Her sons are my Star's greatest friends so when they visit everything goes on hold because 2 years is a long time between visits.  She is funny & clever & witty & one of the kindest human beings I have ever met.

When she was last here Dearest & I thought Sile wasn't quite her usual bubbly self & she was so thin!  We put it down to to worry about her dad, who's getting older [aren't we all] & displaying some problematic behaviours.  It's a long way to come if something goes catawumpus & you are needed in a hurry.  We put it down to having 2 teenage boys in a really tiny house & the slump in the European economy.  We put it down to everything except what it was ~ cancer.

Ever since Sile returned home she has been battling this illness with a string of hospital visits, Chemotherapy, operations, while Pedar still has to travel internationally for work & is gone for weeks & weeks at a time, Ireland has had some of the worst snow storms ever, her youngest started high school & her older boy is carrying the sort of school work load that makes Star's mind boggle.  And she's brave.  She writes cheery little notes on FB about how  her bright red hair fell out & so she bought herself a wig & some glitzy scarves, & how she sleeps all the time & how the strong silent men in her life are being, well,  strong & silent.

When Sile went home last time, after Star & oldest leprechaun  had dragged Pedar out skirmishing & got him battered with paintballs & so exhausted he could barely move, & youngest had inveigled Star down to movie world ~ again! ~ & Sile was kind enough to say how wonderful it had been to have a daughter for the weekend & how much the boys had enjoyed having a sister, Dearest & I got to philosophising, the way husbands & wives do, on how peculiar it was that this friendship had endured the long between times, the ebullient reunions, the pregnant silences & we wondered how many more visits there would be before the boys had their own lives or dad passed away & there was no longer any need for those two yearly visits.  And we talked about scraping the cash together so I could visit, even just once, & career around Ireland with Sile & Star & the leprechaun boys.  It never once occurred to us there might never be another opportunity to sit round with hot cuppas laughing ourselves silly & putting the world to rights ~ but we may indeed have drunk our last cuppa together, shared our last laugh.  There may never be another visit.

Sile is very sick.  She has had a major operation  & is in Intensive Care ~ recovering slowly but she is there & I am here.  I leave prayers & giggles on her FB page.  I send the occasional card but it is not the same.  I miss my friend.  It would be nice to keep her for a little bit longer.
Posted by Ganeida at 3:20 PM

Oh Ganeida--I am so sorry. I'm just sitting her crying and praying for you and Sile. I know how hard it is to be a world away from family and friends. It's so hard. I wish I could give you a big hug or do something more for you, but I will pray!

I am sorry to hear about your friend . . . Sending you a hug.

I had a feeling she was ill when I saw her pictures on your post of their last visit, but that probably doesn't surprise you. I am sorry.

Bonnie: thank you, m'dear. My family's in the same country & it's still hard to catch up.

Seeking: no, you do not surprise me ~ & I'm sure you are aware of other things that would concern me. *sigh* Good thing we're friends. ♥

I'm very sorry about your friend. I hope her treatment will be successful.

Oh I hope this season of friendship and visiting doesn't end soon. It sounds like such lovely times. :)

So sorry to hear that. Wish I could help with the practicalities of your visiting Sile, at lease.

so sorry....I've just had two of my old friends over from the auld country and the lovely thing is that we just pick up from the last conversation. Now that's precious.

Sandra: Thanks. She's really positive & I'm sure that helps.

Siano, my love, you are incredibly generous, but just now a visit from the girl I I would definitely *not* be appreciated. Star has promised to take me to Londom. Ireland is only a hop, skip & a jump away from there. ☺

Gerry: Exactly. Exactly that. It's as though we merely got interupted briefly not flung across a world! lol

(Only catching up some old posts now.) Very sorry to read of this. If the Lord wills, may your friend Sile recover and your dream of a reunion become a reality.