Dont needle the seamstress. ~ anon
Last week I took myself over to the mainland & a very nice lady slathered my joints with gunk, rolled her scanner thingammy around in the gunk, poked & prodded & pushed & pummelled my poor shoulder then announced I had a *stiff joint* & how long had it been bothering me?! Makes you wonder about the medical profession doesn't it.


I dutifully took all the pretty B&W pics they gave me back to our own medico, who didn't look at them, merely read the report & announced what I had already told him ~ my shoulder hurts! Yeah, well.... Honestly. Anyway he wants to shove a dirty great needle in there. Serious meltdown on my part but he promises if they can get the swelling down I can go & do something useful like have Bowens on it ~ which is far more my thing than dirty great needles. They always say it won't hurt; I won't feel a thing & it is never true. It hurts; I feel it & I get huge bruises from their promises. I am NOT looking forward to this one, not even in the dubious event I will be pain free. 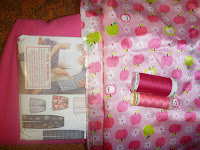 Erratic as we are, Ditz & I are getting some school work done. The first attempt was as much to orientate me as Ditz. I am not really a sewer & certainly not a confident one. Just reading the instructions is mammoth. I'm an English Lit major & 1/2 the instructions don't make sense. Hence choosing something really, really simple for starters. 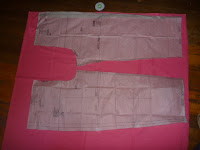 Both Ditz & I tend to be *immersion learners* ~ at least for some things ~ so last week was sewing week. We did do other things but mostly we sewed. First we had to decide which was the right side of our material so we could pin that together. I'm blind & Ditz had no idea what her selvage should look like. My mother would have a fit. She thinks it matters but these are pyjamas & no~one but us is ever going to see them [well, you ladies are but you're not going to be able to tell from these pics whether we got it right or not!]. I think we did but as right or not it is the same side out everywhere all's good.
Ditz has decided she doesn't like laying out, pinning or cutting out. I can understand that but as you can't sew without doing those 3 things first it's just tough bikkies. We had waaay too much material. I had a feeling the girl had cut us too much but better too much than too little. We ended up with just 4 pieces & most of that was straight seams. 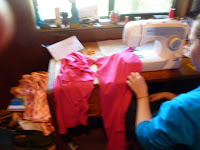 I carefully pinned the right sides together with the correct components. I did this. I was having trouble with the instructions as it is not the way I would have gone about constructing this garment & as it was so difficult to tell which side was which I was taking no chances on Ditz muddling up the pieces.
We set the machine up in Liddy's room on her desk as everything could be left out & returned to at a moment's notice. Once Ditz got the hang of the machine again she was buzzing along at speed. Managed to not go too crooked ~ mostly.
The crotch, which was on a curve, presented a few difficulties but overall this was a really good first pattern choice. It took Ditz about an hour over three days to finish the major sewing, then another hour for the finishing off which included measuring & threading her elastic, sewing the elastic down along the seams to prevent it twisting in the wash [ thanks mum, great tip! ☺] & snipping off all her loose threads. The finished product is baggy & apparently really comfortable. Ditz has hardly been out of them since we finished them but I have no pics. Her bum really does look big in these!

Well done on getting your first sewing project done! Baggy pants are the best homeschool uniform, don't you think?

sounds alot more productive than us, think we can pass toy sale shopping as maths hmmm not atm lol

Baggy jammas are 'in'. I'm totally proud that they turned out. I am *not* a seamstress. That would be my mother's department.

LLL: Blame the National Curriculum... & don't get me started on that! :(

Jan Lyn: You are visiting so much I am really hoping you are feeling great! ☺ Me too ~ & I also once outgrew a project before I finished it. *sigh*

What are you doing with the extra material? You can make hair doodles out of them, or shorts for your teddy bear. :)

eeek! I don't like the sound of that nasty needle business either! Like exchanging one pain for another.

Glad to see the sewing project moving along. Better you than me, that's all I can say :P

My Aunt Helen would have said that "she was spittin' feathers over that sewing!!" She used to go red in the face threading a needle. I loved her the best!!

Amanda: Surprisingly Ditz is happy to sew ~ so long as I sit & chat with her while she does. ☺

Gerry: lol I just might nick that saying. That's a goodie, that is. ☺

I so want to get the Princess started with a simple apron or maybe a very much needed cotton slip, but other priorities are in the way right now.

Ganeida, I will be sure to beseech the Lord about your shoulder during this fast. One lady in our church was complaining of her shoulder, which was the result of an accident about a year ago, so we prayed over her at our special prayer meeting for our 40-day fasting period and she told me the last Sunday that the next day the pain was gone and she was able to move it just fine. I would do anything to save you from a needle as I have the same reactions, which is why I am into alternative health care. I try the least invasive treatments and therapies first always. Now my husband had a shoulder problem that even conventional medicine did not help, needle and all (twice), so he decided to try acupuncture. Too many needles for me, but that is the one and only thing that actually did work! Four treatments and it was just gone and this after two years of messing with it and the next option suggested was surgery even though they did not know what they could do as they could not determine the cause. My husband thought this was all caused by a nerve block (needle) they did for surgery on his thumb when he was in his twenties, because he had periodic problems from then on but this became a daily thing. For his last surgery he had the option of a nerve block in the shoulder or sleeping, and he chose to be asleep. We try to avoid needles!

Missed you - glad to have you back to read:)

I wish I had the time and patiences to sew, it is the one thing I would like to do, but you need the time and space to do it in. The last sentences is funny!

Seeking: I put this off because of the ADD ~ & wise I think. We've had days I called it quits because Ditz went off the air. Always interesting when Ditz goes off the air. ☺ Prayer appreciated. I loathe doctors ~ & ours is a real sweetie. I am calcifying ~ stiff before the grave at this rate! All the joints down my left side. I think it is old age but I can't say I appreciate it! lol

Thank you Jo! ☺ I am trying hard to catch up with everyone's news. ☺ I can't say Ditz & I really have the time or space but putting it in her curriculum means we make the time & space. I wish I was a better sewer ~ but then I'm not overly critical either & that is all to the good with Ditz!

I have been distracted so have not been following. I'm so glad she got this under her belt. Baggy and elastic....right up my aisle!

Sandra: I know it's a busy time for you & you need to enjoy your summer while you have it. All's good my friend! ☺