The book of life begins with a man & a woman in a garden; it ends with revelations ~ Oscar Wilde.

Technically our Liddy is home ~ but we've hardly seen her.  She has been busy gadding.  The thing with Liddy's gadding is it is seldom random; it just seems that way sometimes.

She took Star down the coast during the week then yesterday she was headed in the other direction with a couple of mates.  Bloke mates.  Lid has always had plenty of boys who are just friends.  Comes from having so many brothers & spending half your childhood running with the male pack.


She was pretty tired when I picked her up last night & the traffic coming back through Brissie was pretty bad but when I asked she rolled her eyes & said,"I thought I was mad agreeing to drive those boys 3 hours up, then 3 hours back but..."  I waited.  These stories always only ever have one outcome. Liddy always gets them.  Random conversation starters about God & religion ~ when the enquirer is trapped in a car giving Lid free reign & a captive audience ~ & she never ever starts these conversations!  She just finishes them. Decisively.  Mind you that girl has no trouble at all holding her own against an atheist & an agnostic & coming out on top.  Have no idea where she gets it from.
Anyway she called in briefly at her grandmother's & picked up half the Chrissie presents.  Dino's seems to have been left behind.  The one we thought was his turned out to be tea towels.  He was not impressed.  I think they were meant for me.
My mother is a wonderful woman & she has a knack for choosing wonderful presents.  Star was over the moon with the art things but ma surpassed herself with mine.  I use things up until they literally wear out & fall apart.  It's not just that I hate shopping for replacements, it's that I never remember when I am some place I could actually buy a replacement.  My purse is one of those things.  It has so much jammed in it because I always seem to have other people's bits & pieces as well as my own.[That's 5 library cards, 3 bank cards I don't own, student IDs, one passport {why is that in there?} & 2 strips of panadol.  Why 2?] It was literally bursting at the seams ~ until the seams began to split.  None of the zips function.  You have to hold it just so [so Anne of Green Gables~ish] or coins fly everywhere. It is tattered & fraying & looks like it has been through a war or two but of all things I hate buying I hate shopping for a new purse.  A new one is never the same as the old one & has to be worn in while I stand in shop ques [invariably long & impatient] fumbling my way through unfamiliar territory looking for my belongings.  Left up to me a new purse takes a long long time to happen.  So my wonderful mother took it upon herself to choose a slighter bigger purse to accommodate all the things I don't own & sent it home with Liddy. 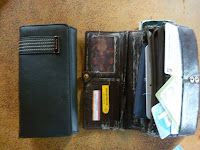 The leather is beautifully soft & all the buttons & zips work!  I won't know myself.  Meanwhile ma's present is still sitting upstairs in the secretariat waiting on an opportune moment to deliver it.  I wish Lid had said she was calling in!
Posted by Ganeida at 2:31 PM

Mothers are great that way--aren't they? I know that mine is anyway. I hope I am too, when its my turn. :-)

And a new purse always makes a girl feel special :-)

Just what I need, I bought a very cheap one and it has really let me down.

he he he, I am just like you when it comes to purses which is why I'm laughing out loud:)

I agree, shopping for new purses is enough to make anyone crazy! Hubby was wonderful and picked up a new one for me for Christmas as well.

I like the backpack type of purse, which is not so easy to find, so last time I did find one, I bought two of them. The one I have is starting to deteriorate to with one zipper not working so well and a strap about to give, so I probably will be moving things into the new one sometime this year and when I do I might start looking for the next replacement.

Dear, my purse is really a large tote bag, I have so much to carry about. Typically half it's contents are food and meds! Mine is akin to carrying a diaper bag, yet I am grateful to be out of that stage. Ha! A new one takes breaking in, but shall be a treat....
Great photo here of Liddy and nosing around your place after being gone so long, I see you even fit in the time to read yourself.
You are an amazing boggity women!

So if a purse in America is a bag what do they call a purse, as in what an English or Australian means when they say purse?

Confused and not wishing to ask Google :o)

Well, Hojo's, as can be seen from my pic, I am refering to what you & I know as a *purse*. I have no idea what that strange lot on the other side of a pond calls their purse if they are already calling their handbag a purse. Once again, a common language divides us.