When I was a kid I used to pray every night for a new bicycle. Then I realized that the Lord doesn't work that way so I stole one and asked Him to forgive me. ~ Emo Philips 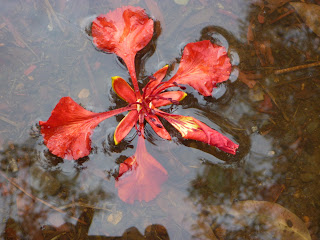 We have run all term & now, suddenly, we have stopped. No singing. No dance. No concerts. Not even caroling this year. Zip. Zilch. Zero. Star is dying of boredom. Her time is usually so accounted for she treasures her free hours. Now she has more than she knows what to do with.


Naturally Queensland's weather has chosen the official start of the school holidays to drip miserably all over everything & pretend it is winter rather than the middle of December & only a fortnight from Christmas. It should be stinking hot. Humid. Muggy. We should be dripping with sweat & lying under the whirring fans dreaming of cool breezes while drinking long iced drinks & scoffing cold ices.


We rocked up to the pool once. The lady informed us the water was icy & she was closing in 15 minutes. Star chose not to spend her hard earned cash on 15 minutes of icy misery! I only like my water at bath temperature ~ which means I almost never swim.


And I don't like chlorine ~ particularly chlorine the kindergarteners have been learning to swim in! Nope.


We have done all the new DVDs. We have been to the library. We have dragged out the cards & jig~saws but sometimes you just need to get out of the house & look at something you aren't responsible for. So I took Star down to the island thrift store. If you're going to do thrift stores it really pays to do upmarket ones in the flash part of town ~ which, sadly, is not the island. More out of desperation than anticipation of finding anything we'd want I detoured to a garage sale & there, sitting on the lawn, was a brand new, unused ladies bike, almost, but not quite, exactly what Star has been wanting for some time. 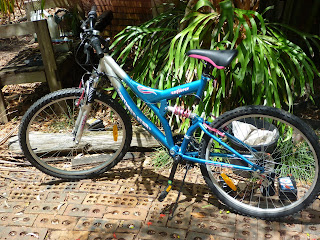 I agreed to go halves. The crash helmet was thrown in for free.
Now Star is not the most physically dexterous of my children but as there was no way that bike was going to fit in my little red car the only way for Star to get it home was to ride it there!﻿ I watched her set off, rather wobbly & terribly self~conscious, then toddled off behind her. Waited by the P.O to make sure she made it up the hill ok ~ seriously necessary. She may be 16 but well~co~ordinated she is not! Once I was fairly certain she was going to make it home in one piece I headed off, Star doing a wobbly zig~zag in my rear view. And that child has a liscence to drive my car!


Then I waited. And waited. And waited. Not that I expected her to be fast but even by Star's standards the child was taking her time. Finally she hove into view....walking the bike. And carrying a pedal!!! The men in my life are now discussing spanners & threads [I thought that was [a] either slang for clothing or [b] what one used to sew with] Only Star. *sigh*
Posted by Ganeida at 1:35 AM

I love the bike and the quote? Is hilarious! :)

That is a sweet bike! May Star become ever more dexterous as she uses it... once the pedal is repaired;-)