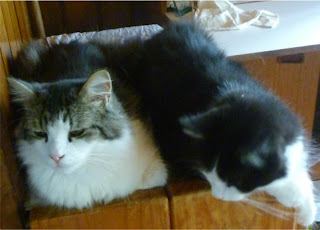 They're worse than children!  Seriously.  I think I own the most demented cats around ~ which is saying something because cats, on the whole, display a wide range of completely neurotic behaviours in their efforts to manipulate the world around them. 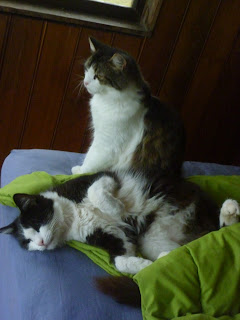 Marlow & Kirby, like the other set of twins I own, are either in a love or hate relationship with each other.  There is no middle ground.  Most nights they will happily sleep tail to tail.  Dearest, who often sleeps badly, informs me they stand guard over me all night long & visit me to reassure themselves I am sleeping well.  As they don't disturb me I cannot verify this rather strange tale.  What I do know is I woke the other night to find Kirby dying by degrees because Marlow was in a bait & had his jaws firmly clamped round his brother's jugular!  I gave him a mighty swat whereupon I got the highly injured look that plainly asks: What have I done? 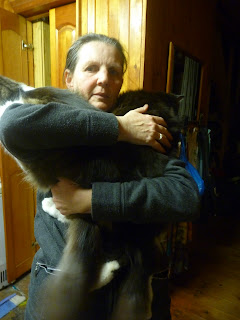 Each night I clamber awkwardly up our stairs grasping my large armful of cat because if I do the sensible thing & carry them up separately there is an all out war over the favouritism of who got in first.  Meanwhile, as bedtime approaches, both cats start circling my computer chair waiting for the first indications that there is movement bedroomwise. And no, they will not walk upstairs on their own at bedtime.  They expect to be petted, coddled & carried & if I don't a great wailing ensures that is guarrenteed to wake the sleepers & have the workers roaring to shut those animals up! So yes, they are very indulged.
Kirby, however, decided to go one better.  Instead of bringing himself downstairs in the mornings he perched on the drawers & cried until I came & got him.  Of course he made this a perfectly acceptable behaviour by greeting my arrival with lavish delight, stretching himself up along my chest, wrapping his forepaws around my neck, & burrowing in with huge rumbling purrs.  Who could resist? 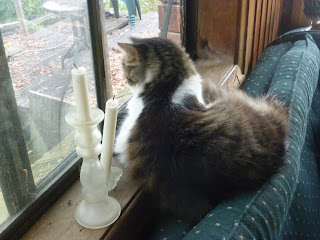 Marlow one~upped him by refusing to get out of bed at all, ensuring a steady stream of visitors anxious about his well~being & prepared to chuck him under the chin.  Both cats are very high strung & though they are pretty relaxed it doesn't take much to spook them so alerted by Marlow's pricked ears & alert attentiveness I investigated. 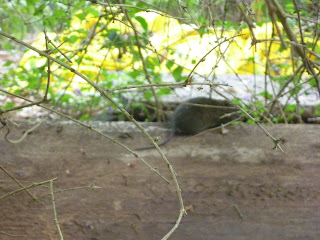 I swear, it's not just the cats.  Everything that lives round here is looney~tunes!  This was playing with Kirby.  Yes, I said playing.  He wasn't in the least afraid of Kirby, as he most certainly should have been, & when I arrived on the scene to remove my cat he came out to investigate me, nose twitching curiously, bright eyes regarding me with decided interest ~ & he hung around while I got the camera & took pictures.
Posted by Ganeida at 2:37 PM

Well until I got to the last few lines I was going to say they reminded me of babies:) not so sure of a baby playing with that thing though, ugh!
Btw I know you're a cat person but we saw a good movie called Red Dog last night, actually there was some stuff about a cat so it might interest you:)

Cats know how to win our hearts which results in us running about after them, at their beck and call. Mine look me so beautifully they know how to wrap their little paws around my finger!! Regardless of their manipulative behaviour we all still love them to pieces and they know it!!!

Your story made me smile. My husband and I have a 7 month old kitten named Mario and already he just loves being carried around. We live in a bungalow, so it's not too difficult.
Kay

Rosemary: Yes, I'm terrible. An absolute sucker for any cat at all. *sigh*

Jo: A lady after my own heart. I know you know what an honour it is to be owned by a cat. ☺

Welcome. Any cat lover is already a friend! ☺

Sharii was carrying something in his mouth when we arrived home two nights ago. Finally, he allowed me to get near enough without running off, but with a constant low growl. I was close enough to determine it was probably a mouse. Good kitty!

Oh yes, Good kitty ~ I just can't stand anything being so terrified. I'm such a woos.