"In Latin America the border between soccer and politics is vague. There is a long list of governments that have fallen or have been overthrown after the defeat of the national team." ~ Luis Suarez 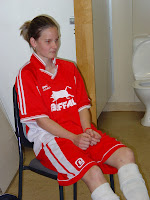 Two years ago Liddy was playing under Premiers at the local club. It's a big family club.  Liddy played with them for years & she was good.  Better than good but a series of wacko coaches & nasty injuries ending with a shattered collar bone finally saw her walk away.
She didn't play last season. This season she signed up with a different club, the club the girls from church play with.  A premier team this is not.  I went to my first game last night because that's what I do in soccer season: I stand on the sidelines in the cold & the dark bouncing up & down wildly & screaming Lid's name every time she touches the ball.  Well, it's one way to keep warm.
Most of the girls have never played before.  They lack ball skills.  They lack fitness.  They don't read the game.  They don't play their positions.  It was not an exciting game to watch ~ except when Lid got hold of the ball.  She scored her first goals of the season: a lovely cross past the goalie from just inside the box & a cheeky little chip over the goalie's head from the other direction.  She scored first & that lifted the whole team but this team has something the premier team didn't; great attitude.  They care for each other out on the pitch.  Liddy loves building people up through sport so she was coaching & encouraging all game & the coach is playing her wide, where she likes to be because Liddy has never been as keen on scoring goals as she has been on setting others up to score.  She has great ball placement & her crosses into the box are a joy to witness.  If she can manage it she much prefers to pass the ball than take a strike herself.
She came of the pitch relaxed & happy.  It's been years since I've seen her enjoy her soccer like that.  No~one gets fraught about whether they win or lose.  They are there to have a good time & I thought that this is what Liddy brings to Chile: She loves her sport & it's through her sport she outreaches & shares the gospel.  I am so going to enjoy watching God work this one through Liddy because Chile is soccer mad & Liddy loves her soccer. 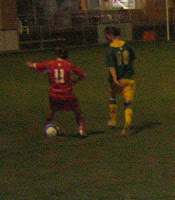 I just loved this comparison of soccer to Liddy's task in Chille. It so reminds me that the Holy Spirit will move as it wills. How playful and wonderful a picture of that this piece is to me.

And you are a ball of diverse surprises, Ganeida! Is there anything you not knowledgable about after raising your children?

As much as we trust God and have faith He has Liddy in his hands, it still doesn't feel all that safe in the mind of a mother in the grips of reality soon having an ocean between herself and her child.