Only an extraordinary person would purposely risk being outsmarted by a creature often less than twelve inches long, over and over again. ~ Janna Bialek 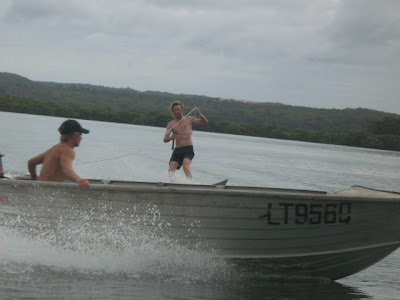 Round here "the boys" usually refers to the cats but I do have sons; 3 in fact.  They are responsible for most of my grey hair.  Seriously.  Dino once rang me on the sea line on his trawler & said, " Guess what I'm doing, mum?"  Nothing good if I have to guess because he's obviously not working.  Never in my wildest dreams would it have occurred to me that even my brainless lad would go scurfing behind an 80' trawler.  Out at sea.  In Great White country.  Um, thanks for telling me, son.  Still we never descended to the depths of my father & his brothers ~ probably only because we never owned guns.  My uncles used to put my father, who was the youngest & just a wee bit spoilt & coddled, up the tree with a billy can of stones.  His job was to swing the billy can to & fro while his brothers took pot shots at it with their .22s.  Um, yeah, ok.

Boy~like the lads were all anxious to be out on their own as soon as possible ~ but house sharing with other lads has its drawbacks & Dino has come back home.  For stability.  For spirituality.  To get back on his feet.  And for the water.  All the lad has ever wanted to do his whole life is fish & crab the bay ~ & make some big money while doing it.  He is in the process of making his dream a reality.  His boat arrived today, a different one to the one in the picture.  He is over the moon.  His father & I, older & far more cautious, have counselled he have something else that will provide a more regular income ~ & he actually listened this time!  An island job, with Christians, has literally fallen into his lap.  It is the sort of thing he can job share with his twin, Theo because Theo will be back too ~ to fish & crab.  The house, which was starting to look far too big is starting to look far too small.  Three grown men & 3 adult women in one space is not at all the same thing as 5 children, 2 adults & a couple of cats.

God give me grace.  I love my kids  but only someone who has tried to cook a meal around a kitchen full of young men making themselves a quick snack to hold them until the meal actually hits the table knows that some days are an endurance trial in grace & forbearance.  I like my mornings tranquil.  I do not like descending my staircase to the early morning aroma of old bait [very old] & a kitchen sink full of angry mud crabs destined for a nasty end. There are days I regret teaching my sons how to bait a hook!  Believe me, if I'd known what was coming I'd've never have done it.
Posted by Ganeida at 3:18 AM

Oh my goodness! Sooner or later you are going to need a holiday...

Oh Ganeida! You must soooo love to have all your big kids around! You give us the frustrated version but deep down you must be thrilled that they are coming home to roost. That they have that haven from the storms of life, a place to fill their tanks. Both physically and spiritually! Enjoy this time cause you know it will not last too long and they will fly again!
Hmmm... I like the sound of that mud crab!

Um Theo... When does he come home to stay and I may reconsider descending upon your doorstep now :)

LOL - does this mean I should reconsider plans to visit you this December?

Quite right boys = grey hair!!! Two boys have dine it to me.

I cannot even comment really....I am going back and forth between, even with all that, I am envious of having such a family and, because of all that, I would probably lose it right now if I had the same situation. (In honesty, I am on the verge of losing it for just about any reason right now anyway and I keep eying a nice little dark quiet corner in my bedroom that I could just sit in all day long and just not be...anything to anyone...maybe for days.)

Ember: Now which century do you think that will happen? ;P

Ruby: I would be happier if I didn't have to cook for them all. If all they wanted to do was sleep & chat life would be good but this wanting to eat too! Some people! ☺

Siano: You may be taking your life in your hands but you are always welcome.

Jo: Only two? Thank goodness the girls balanced things out!

Seeking: It is a shock to my system! I got used to it being just the Star & I. I have one cat completely losing the plot. ♥

Oh my! These Gen Yers! Never know when to leave!

Do be good to you, won't you? A cooking roster would be good - at least a few nights a week...

I loved this post! And I'm with Ruby--it must be a delight in a lot of ways to have most of the kids at home again. Gives me hope!