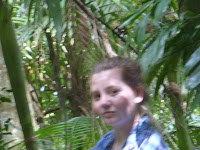 We come from the earth, we return to the earth, and in between we garden. ~ Author UnknownFirstly, because I do a lot of whinging about the Star & not only do we get a little fraught around the edges I suspect I occasionally [only occasionally mind] give the impression that the child is something of a moron.  She's not.  She's actually very, very bright ~ hence the reason for becoming so terribly fraught.

Anyway, seeing as I don't even seem to be ending my sentences [it's been a long day] last term's returned work returned home to roost today. Ahem. Pretty much as expected in the math/science department. Not our strong areas. Very ho~hum. English/history is a very different story. In those we pull As. Without even trying. What's more, by dint of bribery, extortion & terrorist threat I wangled a story out of my Star. Mind you, I had to state in very large letters that it was copyrighted to the Star & was not to be reproduced in whole or part without the express permission of the author! No flies on the Star! Our supervisor, who is sadly very aware that Star is strongest in the fine arts, suggested she do some water colour illustrations & submit it to a publisher as it would make a very good children's picture book. Star actually has some illustrations...I don't have time to get my head round this just now. Our entire holiday period is likely to be consumed by music. 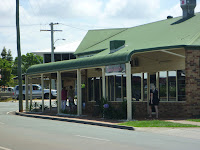 Then today was dentist day for Dearest ~ which means I do a lot of sitting around waiting just so I can drive Dearest back to the jetty all drugged up & uggy.  Hm. However the local shops have a very well kept secret ~ the best bakery in the district!  We sat outside in the first muggy summery day we've had sipping cappuccinos & I indulged in a matchstick because they are always absolutely fresh & crispy flaky. And creamy.  And fattening.  And very yum. 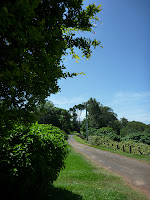 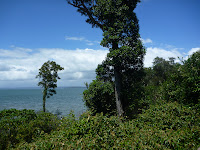 It was an odd sort of a day.  Couldn't make up it's mind really.  While it was still pleasant I took a little wander down the road that wound round the edges of the bay.  Several things made this walk unusual.  There are almost no mangroves.  Unheard of in these parts.  The seaward side has been kept as natural reserve ~ extraordinarily unusual as waterfront is prime real estate.  What's more, as evidenced by this old Queenslander, it has been like this for a long, long time ~ & kept that way. 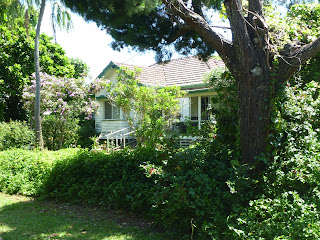 It was a green & leafy nook.  Hard to believe that only a few hundred yards away a busy shopping thoroughfare was carrying on business as usual.
Posted by Ganeida at 1:47 AM

Your day looks glorious! The first steamy day here for a while too. Not very hot though.
Have a great weekend.
That is quite exciting about Star's book/ story. I can see it now ...........by Star Knot!

Ganeida, I love your conversational way of writing. It truly feels like you're sitting down and having a satisfying chat with all of us, and it gives a rich glimpse into who you are. Very refreshing, and I'm glad I found your blog through Ember. :)

Beautiful landscape! When I look at your pictures it makes me miss the east coast even more, no pretty landscapes here in the desert. As for Star and her book, tell her I look forward to reading it to my baby in a few years, so she better get crackin' on those illustrations :)

Ruby: I hate muggy ~ & it is always worse on the mainland.

Julie: lol I can talk the hind leg of a donkey given the least encouragement ~ at least in congenial company.

Birbitt: I need to look into one of the self~publication places. sigh* Where is my get up & go when I need it?

oh no did you have to describe that matchstick so well? *drools* will have to satisy that craving when we are down that way next lol.

You have muggy, we have snow. I despise hot, muggy weather and you shudder at the thought of frozen water. Tomato, tomahto..... : )