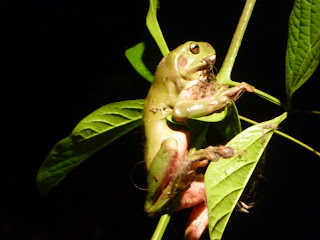 Star & I were up waaay too late last night watching the SBS movie we came in halfway through so I don't know the name.  I do know it was French & let's just say I have a weakness for French movies.

My understanding of French is semi~reasonable ~ depending.  You know how it is.  Some days the brain just won't fire & recall vocabulary.  Anyway I am not as completely reliant on the sub~titles as Star is: she gave up around mid~night.

However part way through & before Star abandoned me to my fate we heard a rattling round the kitchen area & on investigation, in case we needed a cat to deal with an unwanted intruder, we discovered the most humongous green tree frog I have seen in ages., all covered with cat hair & dust he'd collected from scrabbling round on our floors.  We admired him & shoved him out the door having no idea at all how he managed to get in in the first place.

I am down to the last few days of my fast & all of a sudden I just want it to be over.  The psychological aspects always seem to be the hardest for me to deal with but at the same time Ezekiel was rabbiting on about cubits & however often I did the conversion I just couldn't hold the numbers in my head.  Now there's a conversion you would think the translators would just make.  Why wouldn't you?  Especially for people like me who still think in imperial despite the fact we converted to metric back in 1966 while I was still at school.  I didn't convert then & still think in feet & inches so what hope have I got with cubits?

Now it's not that I'm physically hungry; I'm not.  I'm feeling pretty good physically with that lovely clarity of mind fasting brings but I am just tired of being out of routine & having to make all these adjustments because of the fast.  The temptation is to pack it in early so I am hunkering down in the hope that this too shall pass & the last few days will be beneficial.  After all we are done with the cubits for now so at least my reading shouldn't be so fraught.
Posted by Ganeida at 5:52 PM

If I recall you started on the first and planned 21 days, right? If so just two more to go for you, by the time you read this.

I know the feeling. My husband asked me last night when I was ending mine. I think he is still planning to start his when I do. I wanted to say tomorrow, but mine is not based on days but weight this time. I have not hit that goal yet so it is not definite. To make it less predictable, either my digital scale is playing its games with me again--sometimes I do not like technology--or my body suddenly decided to hold on to some extra water, because that would be the only way I could gain a few pounds while fasting.

I am thinking I will probably be fasting until Sunday at this rate and I kind of planned on that. I am ready to begin normal routines too but I am not hungry and the Princess is now capable of preparing her own simple meals, actually she chooses rather healthy foods on her own, I am very pleased to say.

Seeking: lol Yes, I just got up the other morning thinking,I am over this! And yet it is just a different routine & I have been doing it long enough for it to be habit forming. This morning is better so maybe 3 chapters of numbers was just doing my head in. ☺

If I found a humongous green tree frog covered with dust and cat hair rattling around in my kitchen, that would be incentive for me to *begin* a 21-day prayer fast.

Oh Julie! lol we have *wildlife* galore around here & unfortunately a good bit of it ends up in my house. There has been a caepet snake in the roof for years ~ & so long as he stays there no~one really cares but one night he slithered across one of the kids....Lets just say that after the commotion there was a great moving of beds in the middle of the night!

I've never had the will power to fast. I am so impressed with you. Snakes?! Yuck! I think I would rather find frogs in the house then mice and bird (thank you cat). :-)

Bonnie! I hope you don't think I am neglecting you. Can you contact me? Neither your blog nor your email will let me through Ta.

You know a cubit is just a foot nd a half, right? Or just think of feet and at least the proportions will be right!
I have a facsimile 1611 King James, and they translated things on the side notes. It's nice except in the money, where you get lovely bits like "a talent is 750 ounces of silver, which after five shillings the ounce, is 187.li.10.s."
Doesn't help me a bit! :)

MamO: No I didn't get that picture. I think I have metric ~ which doesn't help one little bit! :(